Today! Because I’m out of it for a little while, everyone gets delusions of grandeur –

The first movie I distinctly remember seeing in theaters, Return of the Jedi was everything to me as a kid. I don’t wholly remember a time before it – figure, I was a sturdy three-and-a-half when Jedi came out – but as this was the newest film, it rapidly became the go-to in our rotation of Star Wars flicks. Even now, while (spoiler) it is my least favorite of the original trilogy, I contend it has the single best sequence of any of the films – the Tatooine/Jabba’s Palace first act, obviously. And sure, it just drowns in stuffed animals by the end – and a final action sequence that goes on forever – but as much as you might hate the Ewoks, if you grew up with them, do they really bother you that much? This was a franchise built on merchandising first and foremost! They needed their own line of Care Bears! Come on!

And really, as bloated as this movie might be compared to the first two, there’s not a ton wrong with it. Maybe it’s actually elevated in retrospect, given how lackluster all the later Star Wars movies are. As I mentioned somewhere earlier, after Jedi all we wanted as a people were more films, and they were teased forever. It would take sixteen interminable years for them to finally toss the prequels our way, and they largely sucked. It would be ten more years beyond that for the current series (I guess it’ll be over by the time this reaches you?), and they aren’t any great shakes either. But I’m still glad they finally got made, so desperate were we as Star Wars fans for so long. I don’t really care that they aren’t anything special. We just wanted more, even though Jedi is the definitive end to the story, and probably shouldn’t have been followed-up.

So maybe we shouldn’t have been so demanding. And what real right do we have to be disappointed, anyway? There’s no logical place for the story to go after Jedi, and yet they gave it a shot. Is Episode IX awesome? It can’t possibly be, right? Force Awakens functioned as a fine straight remake of A New Hope, and Last Jedi was a prequel-esque mess, so why would I assume otherwise? But hey, anything’s possible. I like the stand-alones so far, for what it’s worth.

I had toys and books and stuffed animals, and I want to say I had Return of the Jedi sheets, circa 1984, but I can’t picture them. I also thought I had curtains, but I think those were Spider-man. And then NFL teams for a while. I’m going to go Google some stuff real quick.

This also doesn’t feel 100% right, but the curtains were a lot like these

I don’t know for sure that Return of the Jedi was the first movie I saw in a theater – I kinda doubt this, actually – but it’s the first one I remember seeing. It’s the kind of thing we’d talk about as kids, so it was just reinforced between us that we’d seen it, thus cementing in my mind that this happened. It would be another four or five years until I started collecting ticket stubs in a little blue safe/piggy bank I had. For the life of me I can’t find a picture, but not for nothing I totally had this piggy bank/thing, undoubtedly purchased on the Wildwood boardwalk:

Adjusted for inflation, Jedi would currently rank fourth among Star Wars films, only behind the original, Force Awakens, and Phantom Menace domestically, and 16th overall. It was the highest grossing movie of 1983, and finished its initial domestic run as the fourth highest grossing film in history. Hell, by the end of the Special Edition re-releases fourteen years later, it bounced back up to sixth all-time. The box office landscape has changed pretty dramatically since 1997, so Jedi only stands at 73rd as of this writing. It also, apparently, it still my favorite film from ’83, and (more spoilers!) is the only Star Wars film that is my favorite from their year.

Lots of advancing folks – including Carrie Fisher (#259 Soapdish, #151 When Harry Met Sally, #146 The Blues Brothers, #180 Hannah and Her Sisters, #208 Jay and Silent Bob) becoming the first actress in the Six-Timers – but as we glance down the road, someone I’ve clearly overlooked as seriously in the running to end up atop the heap is Frank Oz (Muppeting in #312 Treasure Island, #188 Christmas Carol, #279 From Space, #111 Take Manhattan, also #332 Phantom Menace and Blues Brothers), now the ninth Seven-Timer with plenty of Fozzie/Yoda stuff to come. Could he end up the ruler of the guilds, or whatever the hell you’d call it? Oh man! 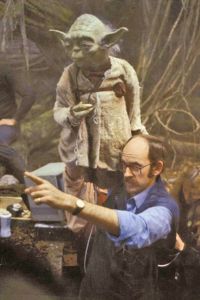 Coming tomorrow! Gentlemen, that’s a very sad thing – to be nothing –