Today! Because they made us too smart, too quick and too many. We are suffering for the mistakes they made because when the end comes, all that will be left is us – 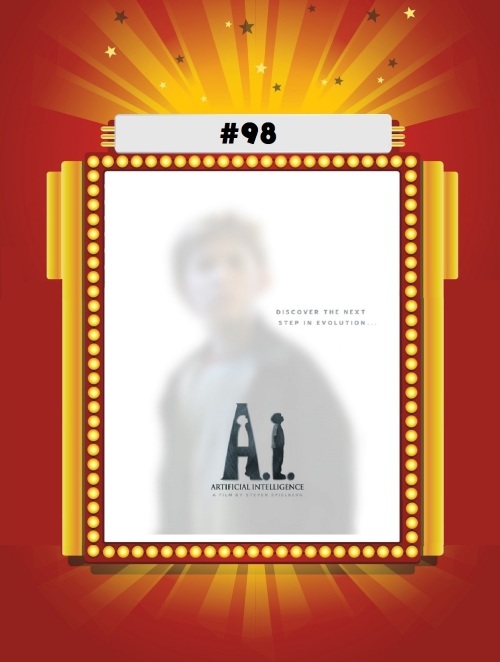 Not often mentioned in the same breath as Spielberg’s best, most iconic films, A.I. Artificial Intelligence holds a weird distinction for me, as the hybrid Frankenstein of a movie that it is. When Stanley Kubrick died in 1999, he left unfinished a number of projects, including his proposed epic biography of Napoleon, some (i.e. me) would argue the final edit of Eyes Wide Shut, and his debatably in pre-production sci-fi epic A.I. Now, Kubrick was taking a helluva long time between movies at this point, so “pre-production” is a pretty relative term, but by all indications this was next up, having started and stopped a number of times, including doing some casting and allegedly recording Robin Williams voice role as it exists in the film. Rumors also persist that Kubrick had discussed with Spielberg the possibility of him directing the film instead. So, when Kubrick died, Spielberg was able to pick up and run with what was largely in place already, cranking the whole film out in just over two years.

And while there is a lot of debate over what parts of the movie were Stanley’s ideas and what were Steven’s, there is no question that the film doesn’t feel like something either one of them would’ve made on their own. I think it works way better as a movie than most people seem to, but I still recognize that the execution is a little messy in parts. I’m also not sure it was the wisest decision for Spielberg to write the film – it was his first solo screenplay credit on anything since Close Encounters – as some of that dialogue is a bit jarring. Still, if you’ve got the elements of science fiction, child actors, absent fathers, fairy tales, and Kubrickian homages, Spielberg was clearly the guy to tell this story. And it served as a nice send off for Stanley, whose last film was kind of a letdown and had put so much effort into this project. Now can’t Christopher Nolan or, hell, Steven Spielberg make Napoleon already?

Then as now I was a huge Kubrick fan, so I’d seen these stories popping up over the years, about how he had this ground-breaking sci-fi film percolating, and was pretty crushed when he died. So, given that the movie is a sound, competent, fairly enjoyable piece of work, I probably gave it a little more praise and love than it deserved. However, rewatching it, while I can recognize some of the odd stitched-togetherness of the whole thing, I still really like A.I. The performances are outstanding – say what you want about The Sixth Sense, but this is Haley Joel Osment’s finest work – and while the concept and setting aren’t as earth-shattering as they may have been when Kubrick first conceived Brian Aldiss’s “Supertoys Last All Summer Long” as a film, it is still a very cool future design with terrific effects. I would hold the opening 45 minutes of this film up to anything Spielberg ever did.

But as a thinking man’s sci-fi blockbuster, it strongly did not connect with audiences. Maybe film geeks dragged its box office to the relatively paltry $78 million it made, but despite fairly good reviews it just wasn’t destined for The Mummy Returns style success, released the previous month, grossing nearly 3x as much. The real mistake was probably rolling this thing out in June – it is not a summer sci-fi adventure at all – as it did manage a few technical Oscar nods, and Best Director, Best Supporting Actor for Law, and Best Score nominations at the Globes. I’m not saying A.I. was going to elbow its way into the Best Picture race, but 2001 did feature okay-ish (A Beautiful Mind) to downright lousy (ahem, Moulin Rouge!) nominees for the top honor.

For the life of me I can’t remember what the main purpose of the paper was, but in graduating from Keystone I had to write a bachelor’s thesis, and mine was on something having to do with man and machines in the movies – mainly covering #243 Metropolis, 2001: A Space Odyssey, and A.I., which had just been released the year before. Man, I’m out of Keystone seventeen years, as of this writing. Seventeen! Jeez. Anyway, that’s how into A.I. I was in 2001/2002 – I had it on the brain so much that I wrote it into a paper I no longer recall in order to graduate from college. I highly doubt I have a copy of that paper floating around – it was like five computers ago – but maybe? I’ll see if I can hook up the old floppy disk drive later!

Teddy, voiced by Jack Angel, is in a lot of ways the heart and soul of this film 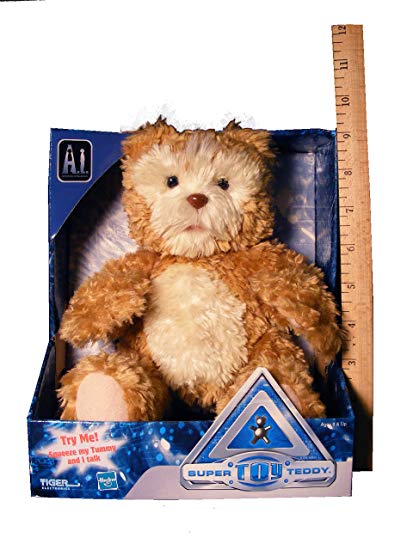 I’m also amazed to discover today you can buy a talking replica on Amazon, in case anyone is looking for gift ideas for this guy

This is Spielberg’s sixth film (after #109 Hook, #226 Munich, #331 Twilight Zone, #123 Jurassic Park, #294 1941) as he continues to stalk Woody Allen on this list, they now being the only Six-Timers, and Five-Timers, for that matter. Also, welcome to the first Meryl Streep movie on the list! And she only voices the Blue Fairy, which is all of three minutes in the film, if that. I don’t even know if she pops up again. She has to, right? Meryl’s in one movie here?! Leading the way is Williams, who voiced the disembodied Einstein-esque head that is Dr. Know, joining the acting Six-Timers (#365 Popeye, Hook, #341 Good Morning, Vietnam, #148 The Fisher King, #112 Aladdin). Spotlight!

“Ask Dr. Know! There is nothing he doesn’t!”

Coming tomorrow! Oh, ho ho! You sly dog! You got me monologuing! I can’t believe it –