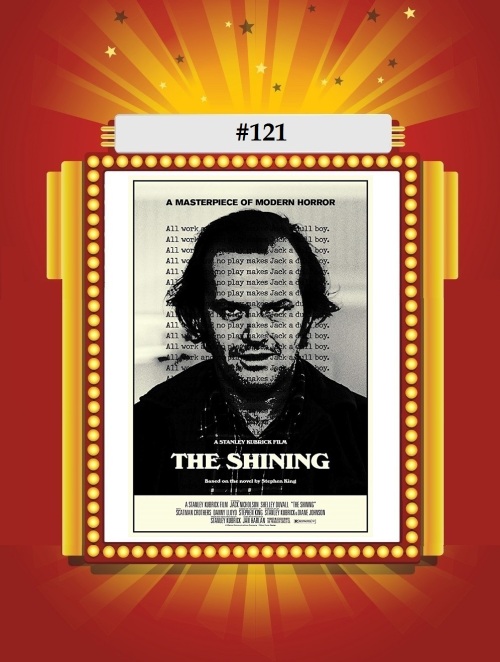 But yes, as much as I love me some Kubrick, this is my least favorite version of The Shining story, coming in behind the book itself – which bears little resemblance to this movie – and the wacky Steven Weber miniseries adaptation from the ’90s. Fun fact, for the longest time the only copy I had of this miniseries was on video disc, a junk format which has largely disappeared, but would play on a computer or DVD player (I believe). It may have been a bootleg, I’m not sure – I bought it somewhere on the internet of like 20 years ago, which as you and I know, is about as similar to the internet of today as Stanley Kubrick’s The Shining is to Stephen King’s The Shining.

No, the TV Shining isn’t remotely in the same league as the Kubrick version in terms of quality – it has that glaringly cheap, phony look of a ’90s miniseries – but it does make a helluva lot more sense, if that’s your thing. I just prefer that narrative to the direction the movie goes. But that movie, my God. From the impossible layout of the hotel to Nicholson’s full-on insanity to poor, poor Shelley Duvall being driven to hair-falling-out stress by the crazy shoot and diabolical Kubrick method, The Shining is as interesting a making-of story as it is impressive a film. Scatman Crothers had to fall down so many times!

I feel like we all have this experience watching this movie, no?

It also functions as a great cautionary tale against pursuing your interests as a writer. Okay, maybe the haunted hotel factors in, plus Torrance is a recovering alcoholic, plus, I don’t know, his kid’s kind of a pain in the ass with his imaginary friend and whatnot, but really, what leads us to the murderous rampage finale is simple writer’s block, right? Have you got some borderline narcissistic rage issues, but you also want to prose it up with the best of them? Do you ignore your job for vast parts of your day, dreaming about that dark-and-stormy-night scenario you’ve got simmering on the back burner? Are you planning on dragging your poor little family to a distant cabin on a mountain or motel in the desert so you can finally have time to bang out your masterpiece? Don’t! Give it up, Charlie! It’s not a life for everyone, and there’s a good chance your kid has psychically summoned the authorities to crack down on your crazy ass anyway!

Coming tomorrow! This isn’t the way, you know what they’re capable of. Please come home. If you come home, I’ll protect you –