Today! Because the misery that is now upon us is but the passing of greed, the bitterness of men who fear the way of human progress – 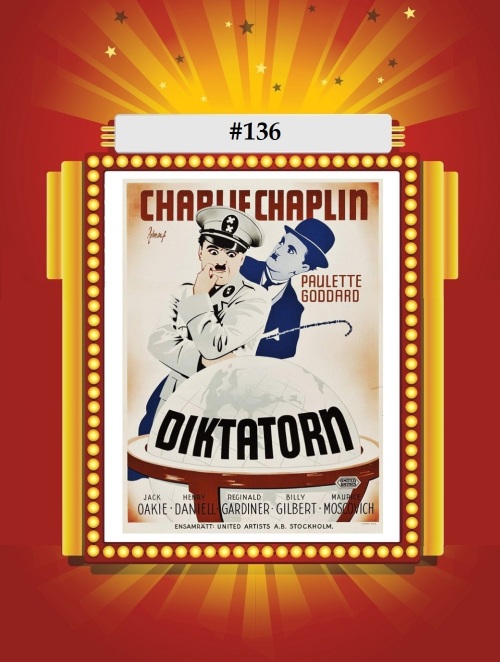 The first Charlie Chaplin film I remember seeing, The Great Dictator was no easy sell – I mentioned this quickly in To Be or Not to Be, but Dictator had a variety of issues stateside and abroad when the movie was in production. First, they began shooting in 1937, years before Germany would invade France and kick off WWII, so many were still calling for appeasement at all costs and were anti-intervention. England announced they would ban The Great Dictator when they learned of its production, despite Chaplin’s continued huge star status and this notably being his first all-talking motion picture (Modern Times still had large silent sections in 1936). Many groups pressured Chaplin to abandon the film altogether, afraid it would further inflame Hitler and the Nazis. It was a weird, brief period in history, and thankfully production ran so long on this movie that by the time it came out, public opinion had swung, the war was underway, and The Great Dictator was largely embraced with the classic status it now enjoys.

Even as war satires go, this one is pretty zany pretty much throughout. Sure, it has that famous, rousing speech for peace at the end – a tremendous five minute oration given by Chaplin, who again, was not much accustomed to speaking on film. – but largely the Hitler character, named Adenoid Hynkel, is played for complete buffoonery, even as the Tramp character (a barber here) is more embroiled in the struggles of the Jews in fictional Tomania, with varying touches of comedy interspersed in the drama.

I would recommend Republicans watch this movie, but I’m afraid they’ll take all the wrong messages from it

Chaplin claimed after the fact that he wasn’t aware the extent of the Nazi atrocities, or he wouldn’t have been able to make as light a film as The Great Dictator about them. Others claim that he full well knew what was going on in Europe in those pre-WWII days, but that Chaplin wanted to go forward as planned, skewering the Germans as he knew best. It would’ve been an odder movie – certainly from Chaplin – had it been a more serious look at what was happening, and it would’ve lessened the impact of that ending – a brilliant juxtaposition to everything that precedes it, containing a timeless message of acceptance that still resonates today, and will forever, I imagine. It has that wonderful, Chaplin-esque quality of being a full-on farce, a frying pan over the head physically comedic marvel, while also hitting dramatic moments with surprising tenderness.

This was Chaplin’s most successful movie financially, and the only one of his films to be nominated for Best Picture by the Academy. It also picked up noms for Charlie for acting and screenwriting, for Meredith Wilson (later of The Music Man fame) for Score, and for legendary comedian Jack Oakie for Best Supporting Actor, in his hilarious turn as the visiting Mussolini-esque dictator Napaloni. It also comes at an interesting intersection for Chaplin – he and co-star/wife Paulette Goddard would get divorced shortly after the picture, plus it marked a pseudo-divorce from his Tramp character. Despite the claims that his barber in Dictator is not really the Tramp as such, it has the same costume design, and the same convention of not having a name, and this would be the last time he would use the character. Chaplin only starred in three more films in his life (which stretched another forty years, nearly), as he became embroiled in scandals, leading to his self-imposed Hollywood exile.

Oh, and anecdotally, while The Great Dictator was banned everywhere in occupied Europe, Hitler allegedly owned a copy of the film, and viewed it at least twice. No record exists of his reaction, but I think it’s safe to assume it wasn’t good. For my part, yes, Dictator outpaces #309 Go West, #145 Philadelphia Story, and #155 Fantasia as my favorite movie of 1940!

Chaplin joins the Two-Timers Directing and Acting for The Great Dictator (his last list film) along with Goddard, following their work in #271 Modern Times, while Herr Garbitsch himself Henry Daniell advances to the Threes, after his roles in The Philadelphia Story and #291 Sherlock Holmes and the Voice of Terror.

He was also the last Moriarty in the Rathbone/Bruce series, in The Woman in Green