You want stagey? I’ll give you stagey! One of the funniest plays of all time made for a very funny, star-studded film in its own right, that doesn’t bother trying to break away from the theater at all in Noises Off. Movies about plays! Or really in this case, a movie about a play within a play, which is the perfect rabbit hole for this guy. I’m not sure how popular this movie ever became, and I know how popular modern theater is to the world at large, so it’s possible you aren’t overly familiar with Noises Off? I’m yet to see it performed on stage – the set is a massive pain in the ass – but this movie used to air on your WPIX and WWOR all the time at the sweet spot in my television viewing history – ’93, ’94, ’95 – and so exposure to Noises Off was very high.

The first act introduces us to the show and the actors through a rehearsal, the second act is a performance of the play but entirely from backstage, and the third is the utter immolation of this play, now from the audience’s perspective. It’s pretty clever and loaded with non-stop gags, but I guess I could see where some folks might not enjoy it. I liked this movie long before I actually did any live theater, so I don’t think that’s the defining line of where the entertainment comes from. And we’ve talked before about stagey movies maybe not resonating with wide audiences, as by most indications people on the whole don’t like the theater. Nonetheless, if ever there was a super stagey film for the masses, it’s probably Noises Off. Look at that cast! Comic heavy hitters like Carol Burnett, John Ritter, and the incomparable Michael Caine! Solid direction from Bogdanovich, long past his prime behind the camera but still able to wrangle this big cast and get the most out of the script!

But for all the great talent involved – Christopher Reeve! Marilu Henner! Julie Hagerty! – my movie MVP is Marcus Brody himself, Denholm Elliott, in full drunken buffoonery as Selsdon.

Ritter (#194 Bad Santa), Henner (#282 Johnny Dangerously), and Hagerty (#334 Lost in America) all the join the Two-Timers, while Christopher Reeve advances to the threes following his first two turns as Big Blue (#305 Superman, #199 Superman II). But it’s the great Michael Caine making the biggest gain today, heading to the Fours, after appearances in #188 Muppet Christmas Carol, #220 Without a Clue, and #180 Hannah and Her Sisters. Spotlight! 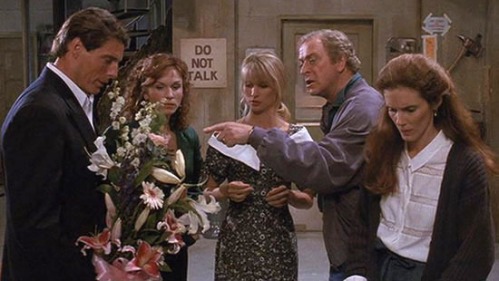 Coming tomorrow! Perhaps he’s wondering why someone would shoot a man, before throwing him out of a plane?