The Set of 400: #143 – My Favorite Pseudo-Goldschlager Endorsement

There is a lot more going on in this movie than I think people remember. Quick – what was Superbad about? Is this a film that is lingering in the memory as the years go by? Was this a sort of hyper-vulgar teen comedy flash-in-the-pan that really served as a big-screen jumping off point for a bunch of actors, but in itself doesn’t really capture the imagination? The real question I guess is – do you remember anything about this movie beyond McLovin?

Don’t get me wrong – McLovin is hilarious. There’s a reason Christopher Mintz-Plasse built an entire career off the back of this role, and it wasn’t because of his acting ability necessarily. The combination of his bizarre delivery and the crossed-up attitude of this character made it instantly relatable to everyone watching. Everyone knew a McLovin growing up – or you were that McLovin – and so even though everyone thought they were smart and funny like Seth and Evan, the massive B plot of the film was the one that resonated – the one where McLovin hangs with fun, doped up cops.

But this movie also solidified Michael Cera and Jonah Hill as movie stars – following Cera’s Arrested Development and Hill’s Knocked Up/“Ask me about my weiner” in Accepted. This movie basically introduced Emma Stone and Dave Franco to the world as well. Hell, Bill Hader hadn’t made many films prior to this, too. It might not get mentioned in the same breath as Fast Times at Ridgemont High enough! 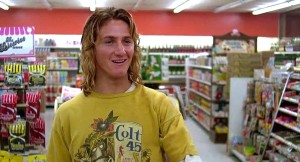 But Fast Times did not have nearly the number of dick drawings that Superbad does. It would quickly lose the honor of Funniest End Credits Ever when The Hangover was released two years later, but the parade of dicks that unspools to close the film is still unexpectedly amazing, no matter how many times you’ve seen it. This whole movie largely holds up, with the jokes only aging as much as your sensibilities have changed. I do wonder if I saw this for the first time now if I would still enjoy it as much. Seeing it at 27 and at 39 (as of this writing!) feel a helluva lot different. Are they still making this sort of dick-joke based comedy in this day in age? I think I’ve written in the past how I considered the mid-to-late ’00s to be the Golden Age of Comedy, and Superbad is certainly a key film in that qualification, but am I just too old now to recognize great comedies aimed at a different demographic than where I currently sit, rusting away into myopic oblivion? Also the name of my debut punk fusion album!

Look for it on SoundCloud!

Superbad was a huge hit in the summer of ’07, but it obviously wasn’t going to rake down awards outside the MTV Movie variety. Maybe an international tribunal could’ve handed over a Best Tiananmen Square Dick Reenactment though, right? It’s not too late!

Coming tomorrow! Well, Colonel, all I can say is… you can’t have your cake and shoot it, too –

One response to “The Set of 400: #143 – My Favorite Pseudo-Goldschlager Endorsement”