Today! Because that’s a Smith & Wesson and you’ve had your six –

For years growing up, we had a VHS copy of the first filmed James Bond adventure, and I was not impressed. It was so hokey and stagey, and that Bond! Wooden! Uncharismatic! That villain! All snide remarks but with no threat behind them whatsoever! This was a load of junk! I’m not even sure where we got it, or why they’d release it on video, because the less seen the lousy made-for-TV Casino Royale from 1954 starring Barry Nelson and Peter Lorre, the better! 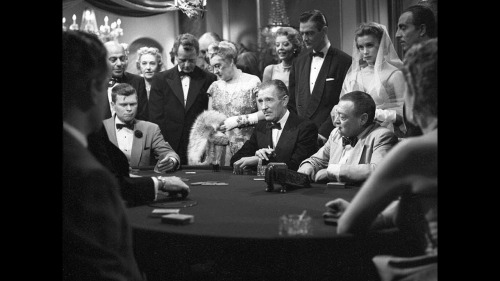 No, they seriously upped their game by the time United Artists brought James Bond to the big screen in 1962. Sure, by later Bond standards, this movie is pretty simple. In quick succession in the ’60s, these movies would become the biggest things going, and so the budgets would rise, the explosions would get bigger, and the production designs would become super elaborate. But what the first film is lacking in overall glitz it more than makes up for in general charm. Even opposite a decidedly non-actress like Ursula Andress, Connery solidifies himself as the eternal Bond – at ease in all situations, suave with the ladies, ready for two-fisted dealings with nefarious types. He kinda ruined the character for everyone to follow, to that point that actors seemed to just choose one aspect of the Connery Bond to focus on and let the rest fall by the wayside. Roger Moore could play smooth, but was hardly an action hero by the time he took over the role. Daniel Craig, on the other hand, is a great running and punching machine, but never really bothers to play up the charisma of the role. Pierce Brosnan actually wasn’t a bad hybrid (even if he was probably a little old for the role by ’95), but did have a pretty terrible stretch of movies to perform in – post-Goldeneye, anyway.

But it’s not like this one was cranked out for the TV anthology show Climax! or anything – Dr. No is still a pretty large scale production, replete with Dr. No’s fabulous island lair and Andress’s shell-collecting musical number. And even if it isn’t the rip-roaring action film like the series would quickly start churning out, there is so much iconic greatness just in the opening introduction to Bond opposite Eunice Gayson’s Sylvia Trench at the card table that it gets elevated in my standing above the likes of, say, Thunderball or You Only Live Twice.

I’m no Bond fanatic, but even I’m a bit surprised that this is the first film from the series on this list. Don’t worry, Fleming acolytes, there are a bunch still to come. This early paucity is almost certainly attributable to that general blending together movie series experienced when I was a kid. Like seriously, I know there were better Roger Moore Bonds than others, but they largely just swirl into one ’70s campy collage that I can’t separate. Much like, say, The World is Not Enough and Tomorrow Never Dies and Die Another Day – what the hell was the difference between those things?

Okay, yes, I remember this was Die Another Day, but what else happened in that movie?

Andress (#336 Clash of the Titans) and Moneypenny Lois Maxwell (#245 Lolita) join the Two-Timers, along with director Terence Young (#209 Wait Until Dark), but it’s Connery making the greatest stride today, reaching the Fours after appearances in #354 The Untouchables, #374 Murder on the Orient Express, and #293 Robin Hood: Prince of Thieves. Spotlight!

Coming tomorrow! Spare me your lies, temptress! Your emperor’s defeated, and I’m immune to your bewitching good looks –