Today! Because I’m very happy to have this opportunity to introduce to you – the soundtrack –

Perhaps the most iconic Disney film to also bore kids to death, Fantasia at the wrong age can be a snooze-inducing two-hour punishment with only a very brief, comic Mickey Mouse to break up the droning symphony. Remembering it as I do from a young age, it is a hard sell in the modern day to induce kids to watch this lengthy silent film no matter how many dancing hippos and mythological creatures populate the screen. Sure, in 1940 it probably fared better, as there were only two feature length cartoons in existence at that point – Snow White and the Seven Dwarfs and Pinocchio. But nowadays – with hundreds and hundreds of animated films to choose from – does anyone bother to force Fantasia down their kids’ throats? 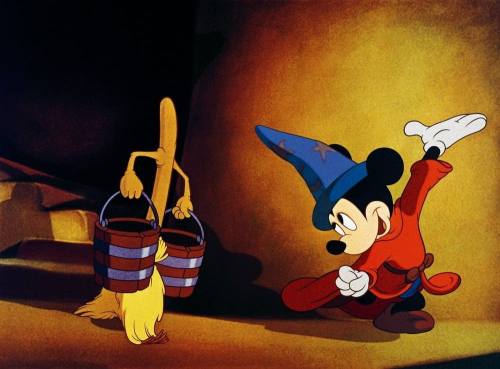 Well they should, goddammit! Fantasia is still one of the most impressive animated films ever conceived, and all the more stunning for the time it was made. Sure, not every inch of the feature is completely riveting – you really feel that running time – but the highs are extraordinary, and more than make up for the brief lulls in action. The obvious centerpiece – and the reason for the entire project existing in the first place – is the Mickey Mouse starring vehicle The Sorcerer’s Apprentice by Paul Dukas, originally conceived as part of the Silly Symphonies series but later chosen to anchor Fantasia when the costs grew. It’s the most famous bit of the film, to be sure, and must be the hook used to get kids to watch this thing at all – unless you’ve got kids way into orchestra pieces, in which case, let them play outside more, huh? Kidding! I was that kid! And I played outside plenty! Stop judging dorks, you nerds!

But if you only came for The Sorcerer’s Apprentice, you should’ve stayed through to the stunner of a finish – Night on Bald Mountain, perhaps the darkest nightmare ever included in a children’s movie. It makes the finale of Sleeping Beauty look like The Care Bears Movie. It makes The Nightmare Before Christmas look like Ernest Scared Stupid. It’s gorgeous and horrifying, and delivers a surprising climax to what at that point has become a pretty pleasant little comic journey through your Stravinskys and Beethovens.

One of the most successful films, animated or otherwise, ever made, Fantasia is still the 23rd highest grossing movie ever when adjusted for inflation, and won two special Oscars for its various achievements in filmmaking and sound. The AFI named it the fifth best animated feature of all-time, and the 58th best ever overall. Is this movie holding up? Am I not giving today’s kids enough credit? Are the Snapchat stories of today’s youth filled with Leopold Stokowski and the Philadelphia Orchestra memes and whatnot? If so, I apologize!

The movie features a load of directors – including new Two-Timers Wilfred Jackson and Hamilton Luske, who both worked on #299 Peter Pan some thirteen years later. #50 and #51! Congratulations!