Today! Because the Godfather himself has decided to grace us with his presence. This is his damn house, he sleeps twenty feet away –

Okay, so I was out of college at this point – well, between college would be a better way of framing it – but I was hardly the stable, mature grown-up my Twitter account would currently indicate I’ve evolved into. But I was also never particularly one for big raging parties – it’s pretty hard to throw epic, Animal House style shindigs when you live at home and commute to college – so my continued affinity of these sort of movies probably stems from a vicariously longing for lost times. I mean, I still hung out and drank my face off periodically, but I didn’t feel like I really had the true college experience, pretty much ever.

And so Old School is the living, breathing manifestation of exactly this mindset. Sure, it’s a nonsense, middle-aged fantasy, and I was in my early-to-mid twenties when it was released, but time already felt escaped to me, to a certain degree, and plus, it’s got a pretty hilarious collection of comedians and pretty juvenile goings on, which was right in my ’03 wheelhouse. Will Ferrell fully arrived as a lead movie star in ’03, between this and Elf, after his SNL years, Mugatu, Mustafa, and Marshal Willenholly, terrific as reformed party animal/backsliding frat boy Frank the Tank. He joins up with Vince Vaughn’s disgruntled Beanie and Luke Wilson’s newly-single Mitch to form their all-accepting rejects fraternity. Great turns abound in quick cameo roles, from Seann William Scott, Rob Corddry, Matt Walsh, and especially Craig Kilborn’s smarmy douchebag Mark. Still one of my all-time favorite talk show hosts! Jon Stewart’s Daily Show was clearly superior overall, but I would argue Kilborn was still the better host, not to mention his terrific years on The Late Late Show.

Obviously, the years have changed my perspective on the whole never-living-at-college thing. Sure, it probably would’ve been fun, but didn’t I come out of it all the better for commuting? Isn’t a successful academic run what the whole college experience should be evaluated from anyway? Plus, I didn’t go to any large colleges or universities – how much different would it really have been? I mean, seriously, how much different? Isn’t that worth exploring? Wouldn’t you like to fund that sort of exploratory endeavor? Please contribute to my Kickstarter so that I can acquire falsified documents and enroll at some giant midwestern college, all for the meaningful study of this other college life. Someone has to compile this information – why not this guy?

Phillips’ second list comedy after #348 Road Trip makes him the 28th Two-Timer director, leading a heady group of actors into their second list appearances as well – Lewis (#360 Cape Fear), O’Quinn (#306 Tombstone), Dick (Road Trip), Mixon (#286 Me, Myself, and Irene), and Corddry (#290 Cedar Rapids). Simon Helberg joins the Three-Timers (#367 A Serious Man, #372 Walk Hard), while frequent co-stars Seann William Scott (#231 American Pie, #322 Role Models, Road Trip) and Matt Walsh (#377 I Love You, Man, Role Models, Road Trip) advance to the Fours! Fun fact – Scott and Walsh are only credited together in four films, the three listed above and Movie 43, one of the worst movies ever made. I was at the theater watching this movie in 2013 when my then apartment building had a massive fire that gutted a large part of the seventh floor, so upset were the film gods that I’d spent my money watching that bullshit in a theater. True story!

Despite co-starring in four films, I find no pictures of them together. So here’s some Movie 43. Woof! 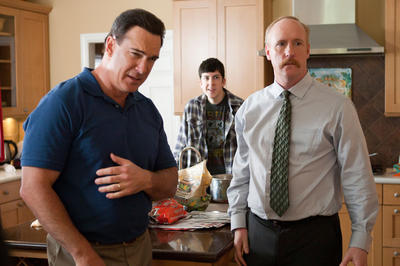 Coming tomorrow! You and I remember Budapest very differently –