Today! Because that was a hell of a thing – 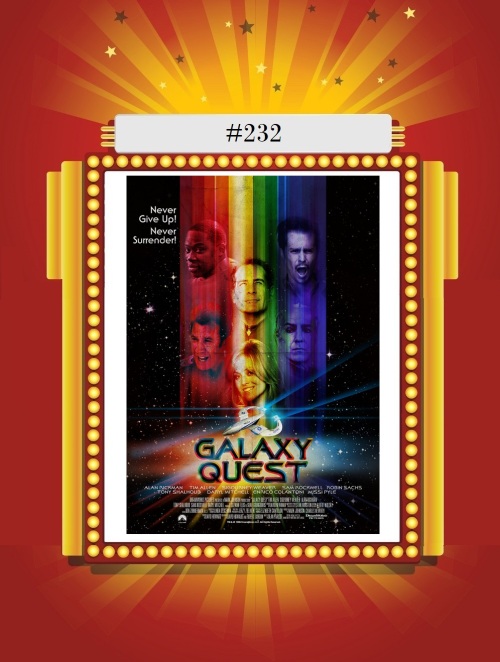 I’m a pretty casual Star Trek fan, and even that might be overstating it. I’ve seen most of the movies – I’m probably missing one or two from the original cast and from the later Next Generation films, and there is no one version of the TV show I’ve seen in its entirety. My sister was the big ST:TNG fan, and so I watched a lot of it during its initial syndicated airing (not exactly an unpopular opinion – I was a Q episodes first/Holodeck episodes second kind of fan). But while this movie is clearly aimed at the Star Trek base, it really applies to almost any obsessive fandom, and I am chocked full of those, man. 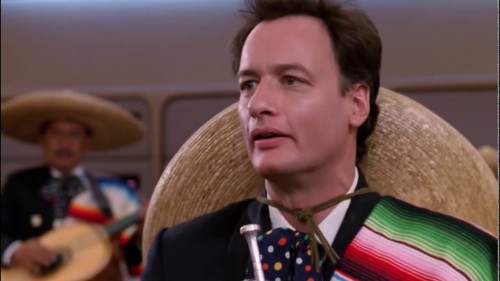 I’m gonna marathon Q episodes soon, and when the wife is least expecting it

A terrific send-up of science fiction tropes and egomaniacal actors, Galaxy Quest also checks that box for me of Movies About TV Shows. It’s not as common on this list, or in practice, as Movies About Movies, or Movies About Plays, but hey, we’ve already done #259 Soapdish, so I’ve clearly got a thing. Tim Allen is perfect as the Shatner-esque Peter Taggart, and this film came along at just the right time, when Allen had clearly established himself as a movie star (The Santa Clause and whatnot) while still best known for his many years of Home Improvement. Art imitates life with the other main stars as well – Rickman seems ridiculously out of place on a hacky TV space drama, and his slow burning Alexander Dane is hilarious, always in full makeup as the show’s Dr. Lazarus, while sci-fi staple Weaver plays the in-show bimbo opposite of Alien’s Ripley, Lt. Tawny Madison, whose only job is to communicate with the computer (“I have one job on this lousy ship, it’s stupid, but I’m gonna do it, okay?”).

But the true scene-stealers are Tony Shalhoub’s unflappable Fred Kwan – not shocked by aliens, otherworldly transport, or inter-species romance – and Sam Rockwell’s terrified, expendable Guy, tagging along on the real-life extraterrestrial conflict despite not even having a character name, and realizing the peril that places him in. There’s plenty of direct correlation with source characters, but enough goofy character work to make this film accessible to even the most casual genre fans. Some of the effects are a little weak in retrospect, but I think that actually works better, hammering home the more satirical aspects of what evolves into a pretty straightforward action movie by the third act.

Five new Two-Timers are spread across the cast, from Allen (#240 Toy Story 2), Rickman (#293 Robin Hood: Prince of Thieves), and Shalhoub (#376 Men in Black), to Justin Long (#372 Walk Hard) in his film debut, to Heidi Swedberg (#276 Hot Shots!), best remembered as George’s doomed fiancee Susan on Seinfeld. But we do have our 15th Four-Timer joining the club today, and our second woman, the great Sigourney Weaver (#352 Be Kind Rewind, #292 Cabin in the Woods, #290 Cedar Rapids)! Spotlight! 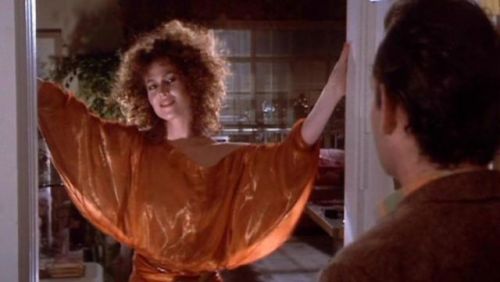 Coming tomorrow! It’s like banging a tennis ball against a brick wall, which can be fun. It can be fun, but it’s not a game –