Today! Because I walked with you once upon a dream – 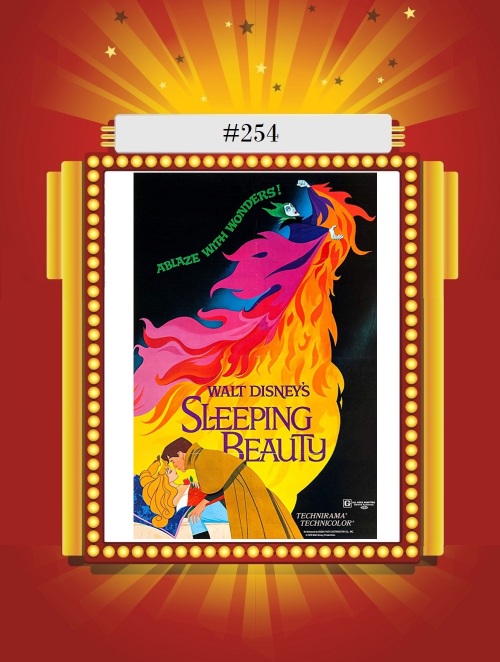 The older films categorized as Disney Princess movies don’t have a lot of appeal for the young boys, I can tell you from experience. Snow White has those dwarfs, sure, but the rest of that thing is snoozeville. Cinderella is pure little girl fantasy – who is a young lad supposed to connect with there, Gus Gus?! I’m not saying all movies need to be aimed at all people, that’s obviously ridiculous, but I grew up with sisters, and got a steady diet of girl-centric entertainment, most of which I did not enjoy. Nowadays I might be able to find more fun in all those birds sewing dresses or whatever the hell goes on with Cinderelly, but back then, not so much.

Of course, the one major exception to this is Sleeping Beauty, because even though it pretty squarely falls into the little girl fantasy end of plot development, before Aurora can find her true love or whatever, he’s gotta battle motherfucking dragons. I mean, the rest of the movie alternates between cute (with the three twittery good fairies) and terrifying (Maleficent is the best Disney villain from the golden age, and…yeah, maybe all-time. Fight me.), but the third act, when the incredibly vanilla Prince Phillip needs to rescue his snoozy paramour, this thing comes alive with action and horror unlike pretty much every Disney film before it.

Sure, there was scary stuff in the Mouse House’s animation wing before – the Headless Horseman, the hunter offing Bambi’s mom, Song of the South – but unawares young Joe sitting through all this needle-pricking hair-combery to discover epic sword fights with fire-breathing monsters was overjoyed. This side of Fantasia, it’s the coolest single sequence to appear in an animated movie up to that point. That’s right, thirty years of feature cartoons boiled down into one four minute stretch. I’m sorry! Early animated movies, for the most part, don’t do it for me.

Except if they were directed by the great Clyde Geronimi, joining the Two-Timers Directors guild today, following his helming of #299 Peter Pan six years earlier. He was involved in most of the major Disney efforts from the ’50s, including directing Cinderella and Lady and the Tramp, and spoiler alert, this isn’t his last film making the big list. See you on February 19th, 2020!

Also, as the third and final film making the list from 1959 (after #316 North by Northwest and #301 Some Like it Hot), Sleeping Beauty is apparently my favorite movie from that year! Congratulations!

Coming Monday! I run downstairs and look under the tree and what do I find? Uncle Alfresco, dead on the floor, shot through the back of the head. Plus no bicycle. It was a disappointing Christmas on many levels –