Today! Because the war is still coming, Charles, and I intend to fight it by any means necessary – 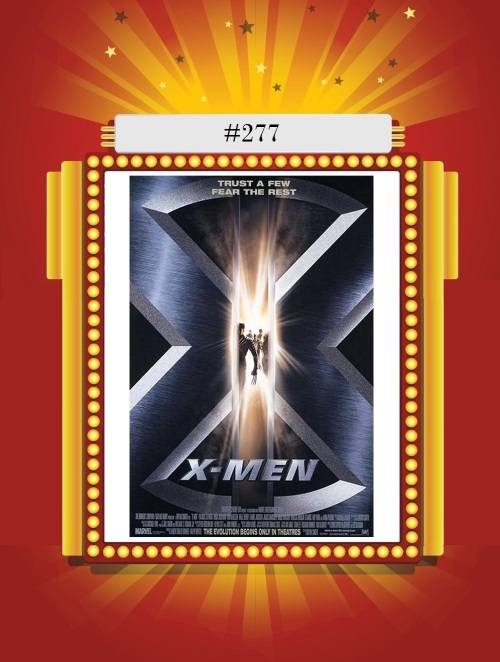 For everyone who bemoans the epic length of today’s superhero movies, realize, large cast comic adaptations can come in under two hours, but they’re going to look a lot like 2000’s X-Men. Sure, it didn’t have a lot to compare itself to back then – it’s preceded by little more than the ’90s Batmans, the ’80s Supermans, and…Blade, I guess? So how would they know to give equal time to the characters and not have it just be, like, Wolverine and his costumed bubs? Halle Berry’s Storm has like fifteen lines in the whole movie! She would win an Oscar within a handful of years of this film, and she’s got slightly more lines than the random wrestler who plays Sabretooth!

And yeah, it has aged terribly in comparison to the films that followed – not only the Spider-Mans, the Marvel Universe, and the Nolan Bat films, but in the X-Men franchise itself. Hey, it’s still better than every stab at the Fantastic Four, anyway! And it is a pretty fun movie, if you can overlook the completely lousy non-Magneto villains, and some of that dialogue. Oh, man, that dialogue. But this was the film that pulled Jackman from the stage and made him a huge star, after the original Wolverine had to drop out, thanks to Mission: Impossible 2 running over filming – thanks, Dougray Scott! Ah, what could’ve been! Would these movies have worked without Jackman? Would we have nine of them??

He’s worked steadily since, but off the top of your head, what’s the last Dougray Scott film you saw?

And so the perfectly cast trio of leads – Stewart, McKellen, and Jackman – carries this film wonderfully, brushing off the completely wasted Ray Park as the dumbest villain in the history of movies, Toad, and introducing us to who would become the de facto main character of the prequels – Mystique, here played with very few lines by Rebecca Romijn. And Rogue! And Cyclops! Hell, Jean Grey practically becomes the main character of this trilogy by the time it reaches its lackluster finale in The Last Stand. They had a lot of setting up to do among these characters, so some people were naturally going to get left by the wayside. At least Storm got to kill Toad.

X-Men would win a bunch of popular vote type awards – Blockbuster Entertainment Awards, anyone? – but little else, as was befitting comic book films of the day. Not that things have changed all that much – even with the Academy changing the number of Best Picture nominees ten years ago basically in reaction to The Dark Knight getting snubbed – but really, the day has to be coming when we see a comic flick up for the big award. At the time of this writing, the 2018 nominations aren’t out, so maybe Black Panther broke through? Was Captain Marvel any good? The fourth Avengers movie? Am I giving away too much about how far in advance I started writing these posts??

Five new Two-Timers join the club, with the only actors appearing in both the original X film and#342 First Class leading the way, Jackman and Romijn, as well as Gandalf himself, #362 The Hobbit’s Ian McKellen, Darth Maul Ray Park from #332 Star Wars Episode I, and King Richard Patrick Stewart of the Mel Brooks #395 Robin Hood: Men in Tights.

He renames all the toilets ‘Johns’! Classic!

Coming tomorrow! Roger that, Foxtrot Zulu Milkshake, you are cleared to land –