You know what? I wouldn’t even say this is a guilty pleasure. I’m proud of how much enjoyment the Broken Lizard guys have brought into my life over the years. Not surprisingly, this all stems from college – or right after college – when I’d go to parties that would almost exclusively be airing Super Troopers. I saw the comedy team live when they came to Chicago about ten years ago, not too long after I moved here. I contributed to the Kickstarter (or GoFundMe, or something) when they were making Super Troopers 2, and I’ve got the t-shirt to prove it. I’m all in.

And while my proud love of drinking comedy has faded over the years – coinciding with my distinct intolerance for hangovers – Beerfest is still a thoroughly hilarious, exaggerated drunken epic, showcasing drinking games against the bones of a plot having something to do with spreading their grandfather’s ashes at Oktoberfest. But like their other films – Club Dread, The Slammin’ Salmon, Puddle Cruiser – this is primarily a compilation of wacky characters and goofy one-liners, a thinly structured improv show of a movie by expert improvisers. But add in virtually non-stop drinking, and 2006 Joe was all about it. 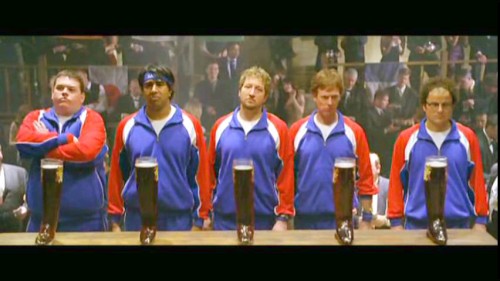 My longtime social media pals may recall my MySpace blog, which was the height of my drinking/comedy online writing, wherein I not only posted the entire original episodic version of Parade Day (the heavily revised version of which is still available on Amazon!), but also a list of my 25 (30?) favorite/best drinking movies. I can’t distinctly remember how I framed it. It included everything from The Quiet Man to E.T., so the parameters were clearly weird, but Beerfest, which would’ve been relatively new at the time, was already climbing the list. For the life of me, I can’t locate this old list – it has to be buried on a hard drive somewhere. Never mind my paper list of favorite movies from ’92! Now that would be a find!

These days, while I still enjoy these Broken Lizard movies – yeah, I’m not overly proud of the drunken mayhem that is Parade Day. Maybe it’s just aging out of an era. There’s still plenty of aliens and time travel and Scranton that I like, but I recognize it’s only like 40% of a readable book, and 13% mangled drunken Shakespeare quotes.

Some lousy Razzies knockoff called the Stinkers Bad Movie Awards (which has since closed up shop) paid a bunch of attention to Beerfest, to which I say the hell with those guys. But hey, any attention is better than none, right? So how about we try to stay on the positive for this movie which has brought so much joy to so many of me – Best Wolfgang Petersen Tribute, maybe? Not only is German submarine legend Jurgen Prochnow employed as a villain in the picture, there are a handful of winking references to this connection, including the drinking contest finale being emptying a large glass boot – obviously nicknamed Das Boot.

Director/star Chandrasekhar first appeared on the list without his Broken Lizard mates, in #377 I Love You, Man, and Will Forte had a voice role in #387 Cloudy With a Chance of Meatballs, but today’s spotlight goes to our third Four-Timer – #357 JFK, #396 MASH, and #289 The Hunger Games co-star Donald Sutherland!

It’s not his highest-brow moment

Coming tomorrow! Do you know your last name is an adverb?