Today! Because it’s help me or help the Nazis – 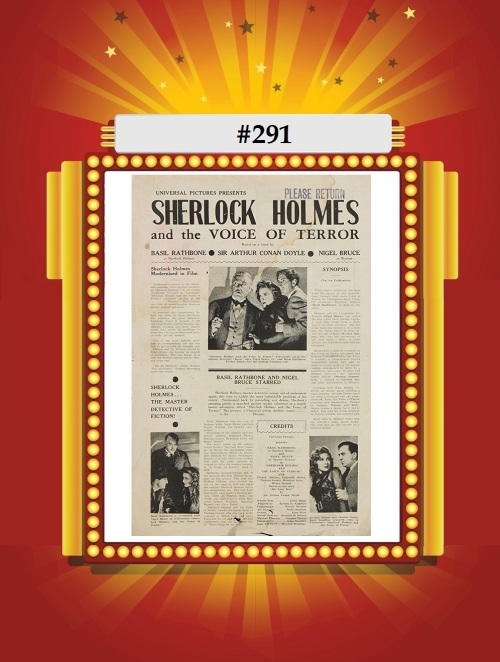 Sherlock Holmes and the Voice of Terror (1942)

The best of the Rathbone/Bruce Sherlock Holmes series with the updated World War II setting, and the only one on this list, The Voice of Terror has a standard mystery film of the era title – The Voice of Terror? What? And like many of the later films in the series (and by later, I mean everything after the first two), this one appears to have been cranked out on the cheap, skimping on sets and run time to maximize the efficiency necessary to churn out multiple movies a year.

However, they stumbled into a pretty effective yarn with Voice of Terror. Based loosely on the original Doyle story “His Last Bow” and the real-life adventures of the Nazi villain Lord Haw-haw (!), this third movie in the group (and the first at Universal, after leaving the big budgets of 20th Century Fox) concerns the government bringing Holmes in to help identify the source of the terrorist radio broadcasts of the Voice, announcing major British setbacks at the hands of the Nazis seemingly as they happen. There are a load of suspects – Holmes quickly figures a member of the illustrious war council may be behind this plot – and plenty of stock footage utilized to depict catastrophes far and wide in Great Britain. 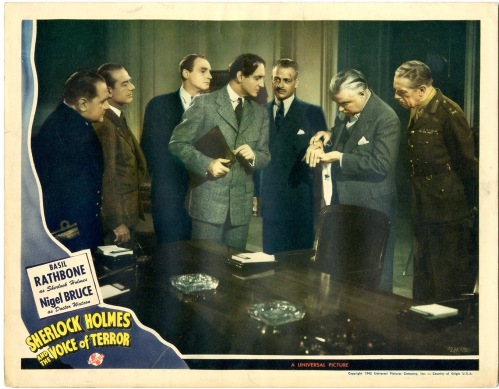 This dude’s wrist is a key plot point

But what makes this one stand out is the very effective sliding of Holmes and Watson into the 1940s – thus enabling the producers to go back and forth in the time periods over the remainder of the series – and the stirring performance of Evelyn Ankers (of many Universal horror flicks) as their seedy underworld contact, trying to drum up information among fellow dockland lowlifes through riveting speeches about England being at stake. It’s a bit jingoistic to be sure, but this movie was made square in the middle of the war, and every slap that could be taken against the Nazi menace was more than justified. The plot widens from mere assassinations and bombing to a proposed Nazi invasion of England, giving the whole affair much greater stakes than most of their Holmes films, and ratchets up the suspense accordingly. 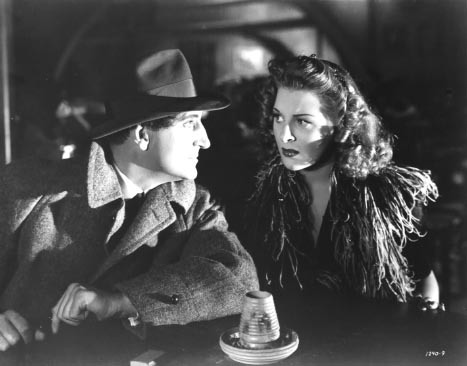 “The Nazis killed him!” – Holmes, putting quite the fine point on it

Like #333’s Hound of the Baskervilles, another future series Moriarty appears in this movie, with Henry Daniell playing a very skeptical council member, critical of Holmes abilities almost throughout. He would pop up three years later in The Woman in Green, and again, it’s fun to watch this movie keeping in mind that maybe this was an undercover Moriarty, trying to undermine Holmes the entire time. Fun, right?

Rathbone, Bruce, and Mrs. Hudson portrayer Mary Gordon all join the Two-Timers club with their repeat performances from Hound of the Baskervilles. How high can this trio climb in our legion of repeat guilds? Stay tuned! At least some of them make another joint appearance this New Year’s Eve! 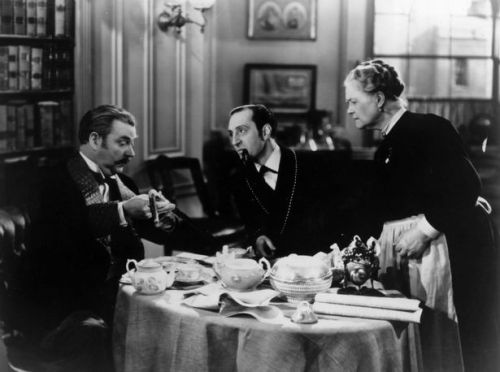 The whole team in Hound of the Baskervilles

Coming tomorrow! Hey Ned, get some honey on your stinger? I love it –