Today! Because I don’t need anything in the world, darling, but you and a toothbrush – 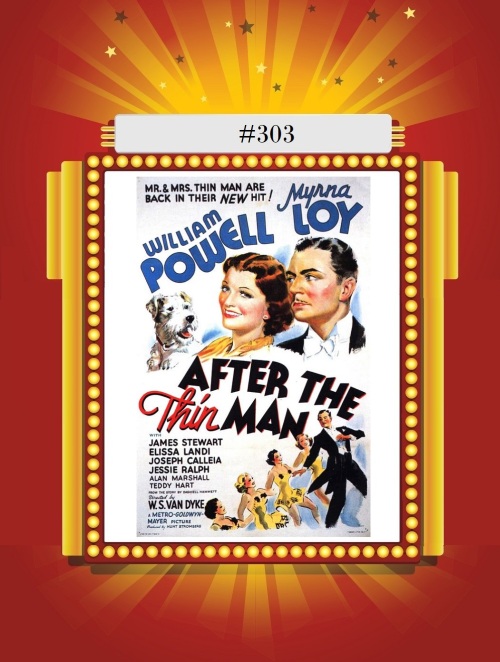 The best of the Thin Man sequels, and by some estimations the top movie in the series, After the Thin Man picks up where the first film leaves off – with Nick and Nora on a train heading west, replete with their boozy banter and dog Asta in tow. Sure, their comrades from the first movie two years earlier who were also taking this train are no where to be seen, but what of it? There are new mysteries to solve immediately upon arriving home in San Francisco! Forget that Thin Man case!

For the uninitiated, the Thin Man movies follow a pretty standard formula for film mysteries of the ’30s and ’40s – central master detective, tight running time, lots of punching, one or two gunshots. What made the Thin Man movies stand out – even from the other, previous William Powell mystery series, Philo Vance – was the light comedy injected by the leads, the married “former” detective Nick Charles and his socialite wife Nora, along with their Wire Fox Terrier Asta, occasionally embroiled in his own drama, due to Mrs. Asta and a neighborhood hound, as in this film. Fun fact – Asta was portrayed by Skippy, who had a robust film career in the ’30s, appearing in the first three Thin Mans, as well as The Awful Truth, Topper Takes a Trip, Sea Racketeers, I Am the Law, and Bringing Up Baby among others before retiring in 1941. In his heyday, he was pulling down $250 a week! Great Depression my foot!

Rin Tin Tin had nothing on Skippy

As the series wore on, the central murder mysteries became more basic, and shared more screen time with the Charles’s home life comedy bits, once they brought a Nicky Jr. into the mix. They’re all solidly entertaining films, but the most elaborate by suspects and twists is almost certainly the second one, borrowing enough elements from the popular first film to keep audiences happy, while adding in fun new characters and a terrific turn by a just barely pre-megastar Jimmy Stewart. This was the first sequel to garner a Best Screenplay nomination! Solid work, creative team!

Also as a bit of much-rehashed trivia, the title convention of using “Thin Man” was more for audience continuity than anything having to do with the movies. The first two films are the only ones where it even really makes sense – the “Thin Man” is the missing character in the original film, and this movie came After the “Thin Man.” But soon, Detective Nick apparently got swept up in the titling as the Thin Man himself, thus Another Thin Man, Song of the Thin Man, The Thin Man Goes Home, etc. But Nick Charles was never the “Thin Man” to begin with. Just so you know! This movie was actually called Nick, Gentleman Detective in a lot of other parts of the world, apparently!

And while he was obviously in shape, I don’t know that you’d classify him as particularly thin

Coming tomorrow! Carlotta was the kind of town where they spell trouble TRUBIL, and if you try to correct them they kill you –