Today! Because you’ll believe a man can fly –

For my entire childhood, this was the only superhero franchise we had. And like a number of other franchises I’ve mentioned, I get the Superman movies waaay mixed up. It doesn’t help that they filmed parts one and two back-to-back, so everyone looks the same, and all the villains from II cameo in I. These two movies are more a single movie than most films with their sequels. Sure, they cut Godfather I and II together effectively as the Godfather Epic eventually, but watching them one after the other in their original form doesn’t bind them together better. But hell, I really have a hard time distinguishing individual scenes from the first two Superman movies to this day. And parts of III, for that matter. 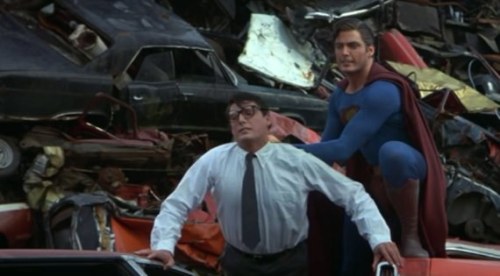 III is bizarre, but I watched it a ton as a kid

And that’s probably because I don’t really watch these movies a ton anymore. The effects are a little dated, and Superman was always kinda hokey, but again, until Batman came along in ’89, there really wasn’t much else by way of big screen superheroing, at least that looked any good. Plus, as a kid it didn’t bother me that they, like, keep making up powers and abilities for Superman in the movies as they’ll come in handy, but now I’m like, really? He can just pull the S off his chest and throw it like a giant cellophane trap? That’s a thing? He can fly around the earth and roll back time? Really?

Nonetheless, Superman (and II) are still the only good Superman movies made, so that’s something. They create an effective mood and tone that just hits the right balance between corny Clark Kent-Lois Lane antics and world-in-peril Lex Luthoring, without really sacrificing either end of the story. Hackman is a great Luthor, Ned Beatty and Valerie Perrine are fun sidekicks, Reeve and Kidder are the definite Supes and Lois, the John Williams score is tremendous, and Marlon Brando shows up to grab a big payday and add some gravitas to the goofy, ’70s reveling Krypton sequence. And again, the effects are a little dated, but they’re still pretty impressive for ’78. A lot of times I’d take this more practical blue-screening over the 100% CGI of today. Maybe it’s just because I can’t stand the current run of DC films (with the exception of Wonder Woman, obviously), but Superman has basically sucked on screen since ’80, so nothing much is getting praised beyond that. 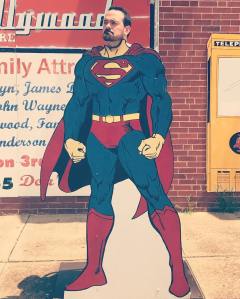 (Fun unpopular take – while it didn’t make the list, I still kind of enjoy Superman Returns from 2006. I don’t care what you say, it’s the third best Superman movie. Which is a low bar, but still.)

This movie blew everyone’s minds in ’78 (or so I’m told), and did grab three Oscar nominations (Sound, Film Editing, Score), plus a special award for its visual effects (not a competitive category that year), but did it get an honor for its Best Pre-Zod Zod, what with Stamp’s villain from II cameo-ing at the beginning of the film? Remedied!

We’ve got a fun pair of Two-Timers today – Stamp, who also appeared in everyone’s favorite Watto adventure #332’s Star Wars Episode I and Marc McClure, who was the creepy object of Barbara Harris’s body-swapped affection in #366 Freaky Friday. Spotlight!

Coming tomorrow! After fifteen minutes I wanted to marry her, and after half an hour I completely gave up the idea of stealing her purse –