The Set of 400: #322 – My Favorite Mythological Creature Based Energy Drink

Today! Because if you white, then you Ben Affleck –

Another film from what I in my infinite late ’00s hubris referred to as the Golden Age of Comedy (okay, if it’s not ’07 to ’11, when the hell is it? Weigh-in!), Role Models is vulgar hilarity at its finest. It’s a stacked group of world-class comedians raucously trading insults and awkwardness with at-risk youths. A dynamite comedy premise if ever I heard one!

Not as random and esoteric as this group’s The State or Wet Hot American Summer, Wain and company got the best out of Rudd and Scott playing the worst versions of their comedic personas. Okay, Scott’s Wheeler might just be a slightly older Stifler, and Rudd’s Danny is a more realistic WHAS Andy, but combined and bouncing off the terrific line deliveries of Bobb’e J. Thompson and the infinite McLovin-ness of Mintz-Plasse, you end up with a movie with as many laughs as any from this glittering golden age (Seriously, when else? Okay, 1934-38, I’ll grant you, was terrific, but none of those movies – none! – feature a gag like Jane Lynch and that hot dog). 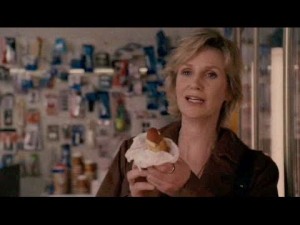 Their slate of random award nominations and wins – Best Bromantic Comedy from the Teen Choice Awards! Most Offensive Male Character from the Women Film Critics Circle! – are probably pretty deserved, but no organization had the guts to bestow Role Models with its true prize – Best Paul Stanley’s Dick Reference, during Wheeler and Ronnie’s breakdown of KISS’s “Love Gun.” Classic!

Admirer of the era’s comedies that I am, it should come as no surprise we’ve got a huge class to induct into the Two-Timers club – #377 I Love You, Man co-stars David Wain and Joe Lo Truglio, #372 Walk Hard’s Jane Lynch, #348 Road Trip‘s Seann William Scott, #387 Cloudy with a Chance of Meatballs Bobb’e J. Thompson, and #381 Spider-Man’s Elizabeth Banks! We’re gonna need to rent a bigger hall for the next class! 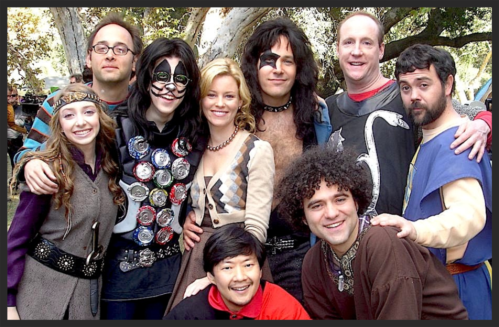 Excepting a few and including future others, here are new Two- and Three-Timers Wain, Banks, Rudd, Walsh, and Lo Truglio

Coming tomorrow! [subtitle] If the rock you stay on starts to roll, jump clean –

One response to “The Set of 400: #322 – My Favorite Mythological Creature Based Energy Drink”