Today! Because a man becomes preeminent, he’s expected to have enthusiasms. What are mine? Baseball!

Brian De Palma’s second TV show adaptation to make the list, The Untouchables is in many ways the quintessential Chicago film. I mean, for all the basic improvement made here over the last hundred years, the two things you still hear most when the town comes up are the Great Fire and Al Capone. And while In Old Chicago is an okay bit of old Hollywood hokum about Mrs. O’Leary’s cow, it’s not in common cinematic parlance. Al Capone, however, has a new biopic or pops up in some TV show every year or two, right? When we were in London last year, and some waiter asked where we were from, the first thing he mentioned in response? Al Capone. Who has been dead for 70 years.

And not to continue too far down this path, but Chicago doesn’t even actively try to embrace the gangster past here. Sure, there’s a cheesy Untouchables Gangster Bus Tour, but no museums, no Al Capone key chains at any of the more official city gift shops. And yet, it hangs on. People like gangster movies, that’s the only explanation.

And The Untouchables might be the best of the midwest gangster films (the New York/Las Vegas films are still superior, I admit). De Niro, for all I’ve weirdly ragged on the guy in this space, was still great in ’87, and does a tremendous Capone. If not for Connery’s Oscar-winning turn as the last good Irish cop, people may have paid De Niro’s mob boss a little more attention. It’s got all the weight gain of Raging Bull but with a lot more courtroom shouting! Couple that with more vintage Costner, doing a great turn as a Kevin Costner type, and you’ve got a colorful, violent shoot-em-up, with great Chicago location spots. Come for the baseball bat beatings, stay for that gorgeous lower level view of the Michigan Avenue bridge!

Sir Sean’s performance was the widely awarded thing from the film, winning an Oscar, Golden Globe, National Board of Review award, and others, with only Ennio Morricone’s terrific score getting universal nominations, but acknowledgement for Best Courthouse Rooftop Murder During a Trial? Nope! Best Handwritten in Blood Elevator Missive? Curiously absent from ballots! Bah!

As said above, this amazingly places De Palma in the Two-Timers directing club, becoming the fifth member, for yet another former TV show. I feel like I’ve written at length somewhere about what a massive hack I believe De Palma to be, and yet this isn’t even his last film on this list. I owe that guy an apology! Just as soon as he apologizes to me for Mission to Mars. His next list film (and his last) is pretty high up, so it won’t appear in this space until next May the 19th, 2020. Circle the date, folks!

The three stars of the picture all join the Two-Timer acting club as well, with #357 JFK’s Costner, #374 Murder on the Orient Express’ Connery, and #360 Cape Fear’s De Niro becoming the 38th, 39th, and 40th repeat performers! Well done! 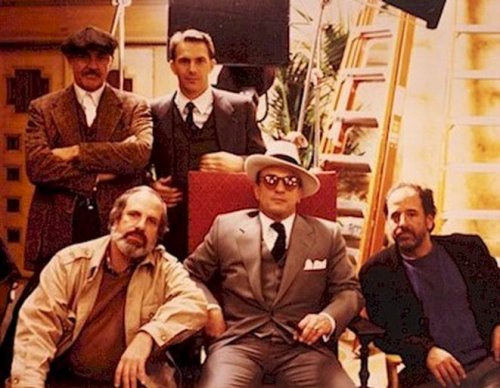 Coming Monday! You’d better do something about this one, because I don’t intend to go through that hell again!