Today! Because whatever he hits, he destroys: 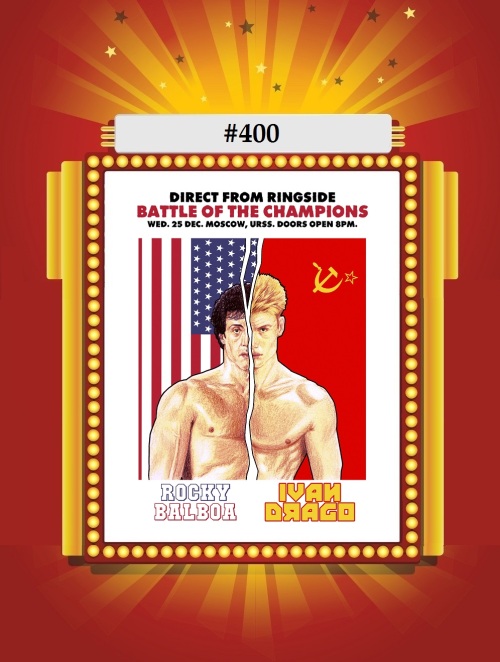 Welcome to the Set of 400! Glad you could make it! And what better way to kick off this epic countdown than with the most unrealistic rock-’em-sock-’em boxing picture ever made! Rocky Balboa at this point was more superhero than Philly meat puncher, and the Russians were still our sworn enemies, unlike today, where they get to vote in our elections! It’s a ridiculously over-the-top movie, but does feature by far the best boxing ring attire/entrance ever caught on film: 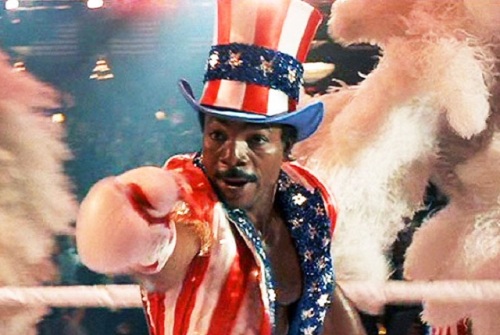 This was the first Rocky movie I remember as being new – even though I would’ve only been about six when it came out. Like a few different film franchises existing in my very early life, I didn’t differentiate between the movies for a number of years, thinking of them interchangeably, and thus probably giving more credit to some than they deserve. Rocky IV almost certainly fits this bill, as again, it’s a completely ludicrous movie, but it’s also the most fun film in the series. Robot butlers! Rocky’s dogsled pulling/log sawing training montage! The Russian crowd somehow supporting Italian Stallion by the end! The Cold War basically ends by the final bell! It’s crazy.

In addition to my awarding Best Ring Attire and Best Ring Entrance to Apollo Creed in Rocky IV, I’d also like to hand it the Best James Brown Cameo award for his explosive “Living in America” performance, entirely aware that it jumps his role in this greasy punchathon ahead of his seminal work in The Blues Brothers and Doctor Detroit. Fight me!

Weigh-in: Where does Rocky IV rank in your personal top 400 movies? I’m sure you’ve got that list within arms reach. And if not, no time like the present to start compiling one! As this enterprise was half-inspired by a short lived social media way to kill time, I’d like to challenge everyone to create giant detailed lists of their favorite movies, and share them in the comments as we go along. You’ve got time to do that, right? Leave your spouses and kids and jobs to fend for themselves for a half a day and give my pointless thing some thought! So, now that you’re all inspired, if it’s not the fourth go-around with Balboa and the gang, what do you have in the bottom slot?