No Eyes On Pete!: A Short and Gruesome Mystery

“Look over here, sarge.” Flopkens crouched by the dead grass. “Here are the poor bastard’s eyes.”

Sergeant Pearson waddled over, all three hundred pounds of gut and toupee, and peered down. Sure enough, there on the green – blue eyes. Two of them.

“What the hell.” The sergeant moaned and plopped down on the sod. “What sort of perverted monster takes a man’s eyes?”

“We don’t know that. Where’s the rest of…” The sergeant checked the notes. “Pete? He was a caddy, correct?”

Pearson strolled over to the cup and took the flag out. Hole empty.

“Thought maybe stuck down there we’d see a…whatever…just a thought.” The golf cart was wheels up out of the water hazard next to #10, and a jacket floated across the surface. “That’s Pete’s?”

“Why don’t you go down there and make sure? And see about a body too, huh?”

“That pond? All that algae?”

Flopkens grumbled, pulled up her pant legs, and splashed on down, a purposeful ruckus to showcase her repugnance of the task. She pulled the jacket along the water’s surface and peered closely at the cart.

“Uh huh. There’s a leg. Cleats. That’s gotta be Pete.” Flopkens waded up and out of the water. She shook her legs, one and then the other, and looked at the jacket.”Huh.”

Flopkens shrugged and turned the pockets out. “Not a caddy’s jacket.”

“Then who the hell thought that was Pete’s?”

“The colors are close. And he’s down there for sure.”

“Jesus H.” The sergeant grabbed a sleeve and yanked the whole works away from her. He felt the jacket carefully. The pockets were empty, but a hard lump near the shoulder was rather unnatural. Pearson frowned. “So whoever’s jacket we’ve got was at the wheel of that mess. That’s a start.”

“Let’s check out the pro shop guy some more. He wasn’t on the up and up.”

“Get your head out of your ass, Flopkens! Who else was here?”

“What golfer would mess up a round to take a man’s eyes, and on number ten of all holes? That’s a hole seventeen act, for sure!”

“Strange jump you made there, sarge.” 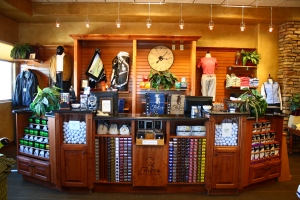 Dummy Curt was at the counter, two balls under the faucet, hands mucked up. He looked up when the bell over the door rang.

“Look here, son,” – the sergeant put a hand on the counter – “you told us that Pete there was a caddy, yes?”

“He was. Lousy caddy!” Curt laughed. The cops exchanged a look.

“So who else was out there today?”

“The cart. We found a jacket.” Flopkens showed Curt. “Not Pete’s.”

“Oh get out, has to be. Sure, a caddy would wear that, yeah. Keep you warm. Lots of pockets. Pretty blue color. Matched Pete’s eyes. Sure.”

“Not a caddy’s jacket, though, Curt.” Pearson stepped to the counter’s edge, to block any route of escape. “Funny you remember Pete’s eyes, too.”

“Why do you have so many stuffed dogs back there?” Flopkens gestured to a back counter, dead poodles and schnauzers and Labradors heaped en masse.

“What? A guy can’t have a hobby? Some golfers pay me to stuff dead pets. What’s strange about that?”

“Plenty strange when they have human eyes!”

Pearson grabbed the nearest Cocker and shoved the pooch up to Curt’s face.

“You offed Pete and were about to take more eyes for your perverted hobby! You’re busted!”

“You have no proof!” Curt took a step back.

Pearson peeled away the breast pocket of the jacket, and underneath – a cutthroat dagger!

“Pull yourself together, Flopkens. Hands up, Curt! No fast moves!”

Curt pulled a dagger from under the desk. “Get back!”

“The eyes! Oh, you see, don’t you? You can see a person’s whole soul, the broad expanse of human knowledge, the depths of the awesome horrors and cruelty capable, all through the eyes! These wealthy scum, they want mute pets who can stare forever, let them be judged by the colossal power of the world’s gaze! Forever, from these eyes!”

Curt lunged, and both cops shot. Curt fell over backward, an elbow hooked around a fearsome Great Dane by the corner, and as the breath escaped Curt’s lungs forever, he looked deeply at the huge dog’s eyes.

“What a wackadoo,” Flopkens noted.

“Yeah. Huh. Pete’s eyes really weren’t necessary to solve the case, too. How about that? Totally useless.”

They laughed, and called for backup.

One response to “No Eyes On Pete!: A Short and Gruesome Mystery”