Today! Because she has more lines than I do and she’s a goddamn mute!

Another staple of early ’90s HBO, Soapdish isn’t the sort of film 12-year-old Joe routinely watched in those days, but it is a movie I routinely saw, given that I can still quote nearly the entire film. Like, I must’ve seen this movie multiple dozens of times. As I’ve mentioned before, this is a sub-genre I really gravitate to – movies about entertainment – so what if it’s about soap operas? The cast is incredible – six Oscar nominees, not to mention future Lois Lane Teri Hatcher, once and future Princess Leia Carrie Fisher, and a great TV exec precursor role to his TV exec role on Murphy Brown, former TV exec Garry Marshall.

It’s a show that got crazier as it aged, but Marshall’s Stan was a terrific late addition

The overriding joke of the movie is that the behind-the-scenes antics of this soap opera – The Sun Also Sets – is as melodramatic as the on-screen program. Star Celeste (Field) had her old boyfriend Rod (Kline) axed from the show – decapitated! – only to now be brought back years later by scheming producer David (Downey Jr.) and bitter supporting actress Montana (Moriarty) aiming to disrupt the production. At the same time, Celeste’s niece Lori (Shue) secretly wedges her way onto the show, quickly becoming a popular star of her own, and gets entangled in all the romantic drama of years past.

Lots of funny bits abound from this solid screenplay and terrific cast, none better to me than the Best Dinner Theater Willy Loman, where we find Kevin Kline’s Rod years after his TV career was derailed. “The mayor of Providence, pop?” “Yeah, the mayor of Providence! Rhode Island!” The final sequence – the airing of a live episode to decide the fates of the characters and the careers of the acting portraying them – totally pays off on the premise, with a winning series of surprises and physical comic bits. “It seems Angelique has a rare case…of brake fluid…bran fluid. Bran flavor.” I don’t know, this movie just tickles me. Can’t help it.

Kline was nominated for a Golden Globe for Actor Comedy/Musical, but otherwise, I’m not sure what sort of impact this film ever had. I’d assume literally everyone has seen this film, given how often it was on TV, but that could just be me. Otherwise, awards for Best Reverse Gender Casting Couch, Best Austrian Brain Diagnosis, and Best High School Yearbook Shocker would need no further explanation, right? Well you’re not getting one!

Tons of new club members from this huge cast – Two-Timers Shue (Back to the Future II), Marshall (Lost in America), and Stein (Planes, Trains, and Automobiles), Three-Timer Goldberg (Ghost, The Lion King), and our third member of the Five-Timers club RDJ (Sherlock Holmes, Zodiac, Wonder Boys, Iron Man 3), joining John Candy and Bill Murray at the ultra-exclusive 5 Entrance. But if you’re getting weary of huge movie legends occupying the top tiers of these clubs, maybe you’d like someone else to root for as we march toward crowning the, I don’t know, President of the Clubs. The person who appears in the most of these films. Surely you knew this was happening, right? Why have I dedicated the clubs so much space all this time otherwise? If you want that underdog to cheer on, how about new Four-Timer Willie Garson (Fever Pitch, Kingpin, Mars Attacks!)? Only the eighth inductee, Garson is probably best known (by a certain sect of the readership) for his role as Stanford Blatch on Sex and the City. I know this, because whenever he appears on a screen, the wife will go “Oh hey, Stanford Blatch!” 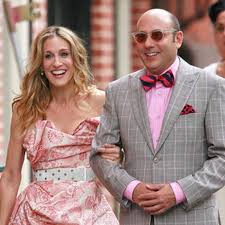 Coming Monday! And from that day forward, he was as one dead –