Today, because I speak for all mediocrities in the world. I am their champion. I am their patron saint – 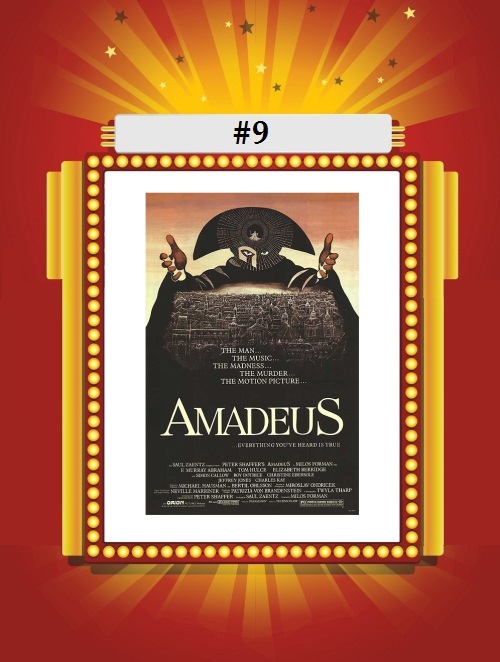 We didn’t sit around the television watching a lot of 18th century Viennese epics as children, but perhaps because of when it was made and how often WPIX was willing to air this four hour (with commercials) biopic, a lifelong love affair sprung up with Amadeus. I mean, it’s basically a perfect movie – the leanest 160 minute film you’ll ever see – full of marvelous performances and dazzling set decoration, and even if you aren’t a particularly big fan of classical music, the combination of filmmaking expertise on display and riveting soundtrack make for an always engrossing audience experience. But for a kid? How and why did this movie catch?

I think having such a basic conflict is easy to understand at any age. Mozart – loads of raw talent, kind of an immature asshole. Salieri – marginally achieved skills through hard work, bitter at the very existence of Mozart, in a position to screw him up. Even years before you get into serious schooling and/or the workplace and you encounter people who basically fit either of these categories, the concept resonates – jealousy, yearning for acceptance/friendship, speaking backwards as a way of impressing potential romantic partners. A lot of basic human desire is evident out there! Plus, vibrant settings and fun costumery and terrific location shoots and the make-up! Again, it’s a perfect movie. I’ve used this description periodically on this list, but there’s always like one weird thing even in the best of movies to kind of rankle you, right?

But what would that thing be in Amadeus? It’s kinda long, okay, but again, it is all 100% necessary. If anything, the slightly expanded version on DVD might be better, as the added scenes give a little more heft to, say, Mozart’s wife Constance. It’s based on a play? We’ve talked about this as a drawback before – but this is the least stage-y play adaptation of all time. Hell, go read Peter Shaffer’s play – how they took that basic drawing room tale and jumped it into this grand cinematic masterpiece is high level film study in itself.

It doesn’t quite look like this performed on stage

And as great as Forman’s grand overall vision is for this, his second true film masterpiece (made nine years after Cuckoo’s Nest), the performances don’t get lost in all the giant sets and stirring music. Abraham’s Salieri is the greatest film villain of all-time, while in the role of movie narrator, no less, and is easily the most relatable character. How often is that the case? His hatred for Mozart is nearly all-encompassing, and his underhanded methods of undermining his position in Vienna borderline diabolical, and yet he is endlessly praising Mozart’s actual ability in spite of himself. He manages to limit the number of times Mozart’s operas are performed, but attends all of those performances. There are glimpses throughout the movie where he seems to want Mozart’s approval, or at least acknowledgement, as a composer, and when Mozart repeatedly dismisses his talent he falls deeper into his twisted bitterness.

Abraham would win the Oscar, but that isn’t to take away from Hulce’s amazing performance, either. In a lot of ways, he has the harder task – making sense of the immature savant obnoxious genius role. Movies about writers (composers) have a hard time conveying the actual process, because it isn’t inherently cinematic, and it’s even more difficult when one figure is being propped up as vastly superior to another. But this movie has probably the best sequence of physical writing ever put on film. Using the scenario of Mozart’s deteriorating physical condition and Salieri being the one to help copy down the Requiem (for his own purposes), we get the full exposure to their abilities and methods, their contradictory ideas about music, and Salieri’s dawning realization of how Mozart’s genius operates. It’s a devastating scene, in a movie filled with them. 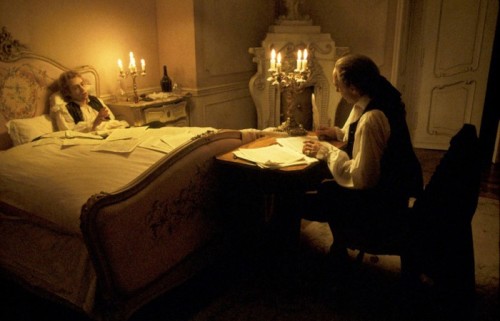 Perhaps the best remembered thing about this movie, though, is the sheer volume of awards it won in 1984. Not the world’s greatest year for film (Ten movies on this list, but come on, #355 Top Secret! and #111 The Muppets Take Manhattan weren’t contending for Oscars), Amadeus won eight Academy Awards of its eleven nominations, including being the last film (as of this writing) with dual Best Actor nods. It took home Picture, Actor, Director, Screenplay, Costumes, Make-Up, Sound, and Set Direction. Jeffrey Jones terrific work as Emperor Joseph II was snubbed, but he did grab a Golden Globe nomination (It won Picture, Director, Actor, and Screenplay there as well). It was named the 53rd best movie ever by the AFI in ’98, and still resides in the top 100 on IMDB rankings.

Coming Monday! They say this train don’t give out rides/It don’t worry me –

One response to “The Set of 400: #9 – My Favorite Excessive Display of Notes”