Today! Because we all got it comin’, kid – 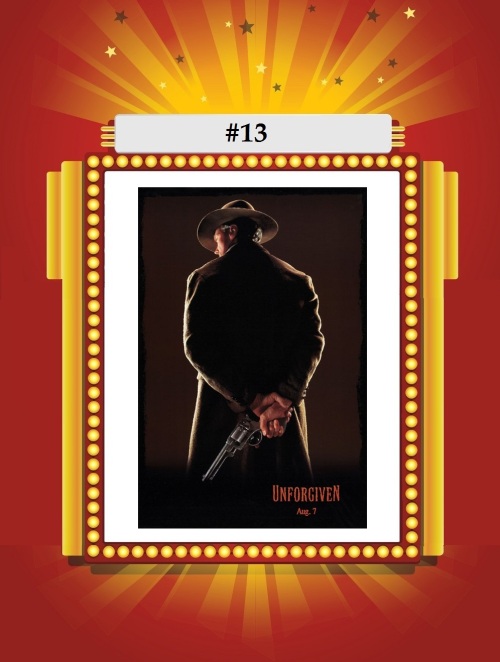 Featuring one of the great, unsung musical scores of all time, Clint Eastwood’s last western was revered and honored in its day for virtually everything else connected to the film. I’ve never been a huge Eastwood guy – sure, some of his later movies, basically from this point forward, I enjoyed – #335 In the Line of Fire being the only other list film for him, but A Perfect World, Gran Torino, Million Dollar Baby, American Sniper – all solid. I could never really get into his spaghetti westerns, as acclaimed as they are, and opted more for his wacky Dirty Harry films or more aged cowboy flicks like Pale Rider or The Outlaw Josey Wales. So I guess all of this led me to Unforgiven – not just my favorite western, but squarely in the conversation for my choice as the best western ever made.

The 18th and final film from one of my most formative years of movie watching, Unforgiven‘s place as that year’s Best Picture almost certainly helped it hang in my memory all these years. I had that year’s Oscars on tape, and watched it a weird amount – Billy Crystal hosted and did some typically great bits, including songs dedicated to all the top nominees, including Unforgiven to the tune of “Unforgettable,” which I still remember all the words to:

“Unforgiven – that’s what you are/
You killed everyone,’cause you’re the star/
You directed and produced with ease/
Long way from singing “I Talk to the Trees”/
Let me not be the last to say/
Tonight may make your day”

I’m pretty sure I saw this movie before the Academy Awards, but it’s hard to say for sure. Unforgiven came out in the late summer of ’92, so it’s possible it would’ve been on video by the end of March ’93 – even back then, when the home release was much later than where it is now. If not, it might explain how so many films from that group have stuck with me this long – disparate, unlikely movies given the type of films largely populating this list. Other Picture contenders #207 A Few Good Men and #262 The Crying Game have both stuck around through the years, never mind #242 Chaplin and #219 The Player and #126 Glengarry Glen Ross also featured on that show. My young, easily influenced mind may have overrated all of the above down through history due to my odd obsession with the 65th Academy Awards!

But Unforgiven is the only one to crack to the top 100. Even as a twelve-year-old, the aged gunslinger out for one last score tale resonated with me. It’s a grippingly moody, lyrical film, with great little comic bits, especially from Gene Hackman’s joyously antagonistic lawman Little Bill and Richard Harris’s self-important would-be assassin English Bob, and one of my favorite tropes I didn’t realize I had until this list – a great silent, judge-y character. As you may recall from #60 Teen Wolf, Scott and Stiles’ pal Lewis barely says anything, but oddly becomes the conscience of the film, just through his handful of uneasy/critical glances. Unforgiven features a similarly awesome presence – Morgan Freeman’s gunman Ned’s wife, Sally Two Trees, played by Cherrilene Cardinal. Film MVP!

Sally judges the hell out of Ned’s choices

As I’ve read the original script, I know the reason for this, but I would also like to point out that Unforgiven may be the only movie I can recall featuring a lone black character whose race is never mentioned or alluded to once. And for a movie set in the 1870’s, too! Sure, the reason is that the character wasn’t written in any race specific way, but after casting they didn’t try to shoehorn any bits about it into the story. Hell, maybe they should’ve – I’m curious how Ned got caught up outlawing with Eastwood’s Will Munny, a known thief and murderer, a man of notorious vicious and intemperate disposition. Just from the anecdotes peppered into the film about the old days, I’d always kinda wished we got a blood-and-guts prequel to this film. Hell, loop in Little Bill and Bob, too – the rich backstories of all the characters are a big reason why this movie is so compelling. By the time Unforgiven unspools, we feel like we’ve entered the final episode of a long-running television series of modern design!

And yes, again, it features the best unheralded musical score in the history of movies. It’s a simple score, to be sure – nothing overbearing and bombastic to accompany this story – but it perfectly accentuates every beat in the film. But, despite wrangling nine Oscar nominations, they couldn’t find one for Clint and Lennie Niehaus on the music? I’ve seen everything nominated for anything in ’92 (I think), and I couldn’t tell you what the hell the music in Howards End or A River Runs Through It sounded like. Okay, Unforgiven wasn’t going to win – thanks, #112 Aladdin – but it should’ve at least gotten a nod! Calling bullshit on the proceedings!

Lennie’s been jamming a long time with limited recognition!

Clint’s first Best Picture/Best Director winner is his only directorial effort on the list, but he did guide Gene Hackman to his second Oscar and the Six-Timers club today, following Superman, Superman II, The Royal Tenenbaums, Get Shorty, and Young Frankenstein.

It worked out well for both of them

Coming tomorrow! Up is down, black is white –