To be a fan of Forrest Gump in 1994 was decidedly uncool. This was a year of pretty bad ass, cutting edge cinema – what with Speed and Pulp Fiction and The Shawshank Redemption and True Lies and that baddest ass shouting match in cinema history, #317 Blue Chips. ’94 had it all for bros and dudes alike. And then you had Forrest Gump. Everyone’s mom loved Forrest Gump. The soundtrack was straight out of 1969. It had a boatload of dopey quotes and silly cameos by Elvis and John Lennon. It boiled down all of American history and southern racism into little bite sized comedic nuggets, and then hurled AIDS into the mix just to find an ending. Dammit, Forrest Gump!

This is the same movie where he tells LBJ he got shot in the buttocks!

However, as the years went by, and the general schmaltziness of this movie dissipated once it no longer had to be directly compared to the other films of ’94, Gump sort of rose above its initial impressions. I mean, it was a massive hit in its day, and it won Best Picture against all odds, fairness, and logic, so it’s not like it needed to find an audience or acceptance or anything, but for the slightly snobby guy element, obsessed with the vanguard of exciting new cinema in the early ’90s, Gump was a sugary throwback epic, even for all its fancy special effects. I enjoyed it well enough the first time around, but ’94 was just too much cinematically for a full embrace of this movie.

But my God, I’m not sure there is a more endlessly watchable movie than Forrest Gump. It’s lovable to an insane degree – Forrest may be an imbecile, but his presence manages to soften all the rough edges of the movie. Lieutenant Dan’s morose nightmare of a storyline would make for a grim, unbearable post-Vietnam dirge – not unlike, say, Born on the Fourth of July – but his progressive genial relationship with Forrest humanizes him in ways the pure tragic/war focus couldn’t have. And his story is a Disney movie in comparison to the complete horror show that is Jenny’s life – as funny as this film can be, it has unbelievably dark interludes, and yet the tone somehow manages to stay consistent, and the movie is never anything but captivating. It’s a miracle of a movie.

But is it the best movie from 1994? No, not even sort of, however it makes perfect sense why this would win so many awards, and wound up topping even The Lion King at the box office that year. While it didn’t turn the film world on its head (some of those effects, then and now, are a bit jangly), it managed to be that rare hilarious-comedy/sobering-drama with a mentally challenged lead war/sports film the world was apparently yearning for. The performances are first rate – Hanks winning Best Actor for the second year running, Sinese picking up a Supporting nomination, Wright and Field garnering Globe and BAFTA nods respectively – and Eric Roth’s screenplay is a wonder, considering the Winston Groom novel is kinda terrible (they thankfully never mounted the utterly ludicrous book sequel Gump & Co.).

This movie was the obvious high water mark for Zemeckis – in a tight debate with Back to the Future – but things aggressively wouldn’t be the same going forward. I don’t know if it was the awards or what, but in trying to continually reinvent himself afterward, he basically disappeared from relevance, with increasingly disappointing films. Yes, the first few years you had Contact (pretty good), Cast Away (solid), and What Lies Beneath (okay), but then came all the motion capture shit – The Polar Express (eeeesh), Beowulf (ehhh), A Christmas Carol (meh) – a few colossal bombs – The Walk, Allied, Welcome to Marwen – and Flight in the middle (also okay). I’m largely of the opinion that winning Oscars is basically the worst thing that can happen to any filmmaker – as it seems to derail abilities, priorities, and focus to a wild degree – but it did something very different to Zemeckis. It seemed to content him, to all our detriment. 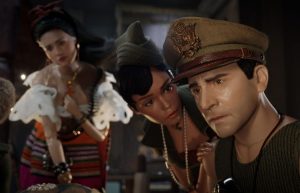 Seriously, who the hell was this supposed to appeal to?

For whatever reason, there’s one character I tend to quote most from this film, and so I’m compelled to give the MVP to a very brief, real-life figure – Richard D’Alessandro’s Abbie Hoffman. I must say “That’s a right on, man” at least once a week. Also, the way he says “Forrest Gump” is basically the only way I ever say the film’s name out loud.

Coming tomorrow! I once asked this literary agent what kind of writing paid the best. He said, “Ransom notes” –