Today! Because I really am a horse doctor, but marry me, and I’ll never look at another horse –

The last really good Marx Brothers movie (and even that is up for some debate), A Day at the Races functions as a solid last gasp for the team, even though they couldn’t have known it when production began. Like on A Night at the Opera two years earlier, they had the benefit of road testing some of the material, to get the jokes down solid and the timing together to hold for laughs. They had the enthusiasm and support of MGM boss Irving Thalberg, who threw them the money and resources to make this work, and got the film launched before cameras in the fall of ’36.

For two years, they were quite the team

Two weeks into shooting, Thalberg died, casting a pall over the rest of the filming and ultimately crippling their film careers. Sure, they kept making movies, including some decent efforts like Go West and At the Circus, but the returns would continue to diminish – box office and critically – until they hung it up for good a decade later. Groucho would often point to their two major MGM/Thalberg films as the best the team produced – you can make that case for Night at the Opera, but it’s more rose-colored reminiscing when it comes to this.

Day at the Races is pretty funny, and has some decent-ish musical numbers, but where Night at the Opera could get away with the lengthy romantic subplot – because it was all tied together by classic Marx routines – this one suffers a bit by the lack of true home run sequences, and the borderline racist “All God’s Chillun Got Rhythm” number. Sure, the Tutsy Fruitsy Ice Cream routine is wonderful, and some of the vintage, madcap Marx running around causing mayhem at the sanitarium is great, and again, this is still far superior to every movie they’d make afterward, but it does feel like they’re on fumes a bit here and there. The whole MGM strategy was to have the brothers do less in their movies – and flesh out the other plot aspects – which did work, box office wise. These two movies were vastly bigger hits than what had come before, but don’t nearly measure up in pure jokes, and run considerably longer. For that reason, I’ve got Day at the Races down here at #173 as my sixth favorite Marx Brothers feature (which really shouldn’t be a spoiler, if you know me at all). 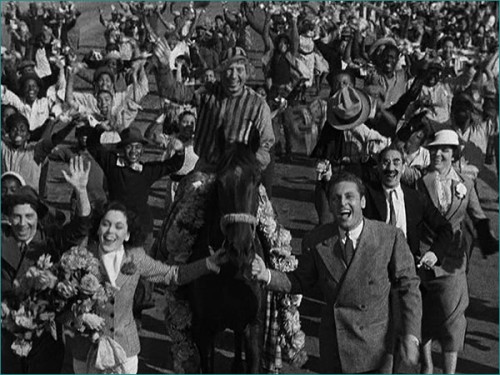 This is the only Marx Brothers movie I’m aware of that received an Oscar nomination – for Best Dance Direction in the last of the three years that award was given out. I like that if you go back in Academy Awards history far enough you find things like this random category – why can’t we have more crazy awards in the here and now? There was talk of adding a Most Popular Film Oscar recently, which sounds like a horrible idea, but why not? Oscars for everything! That certainly might’ve snagged Day at the Races some well deserved accolades, like Best Horse Pill and Best Cut For Time Nightclub Act Number, as Groucho would sing the “Dr. Hackenbush” song for decades to come on radio and stage, even though it does not appear in the movie.

All the brothers advance to the Three-Timers, following #261 The Cocoanuts and #309 Go West, along with Margaret Dumont (Cocoanuts) and Maureen O’Sullivan (#180 Hannah and Her Sisters) joining the Twos, but let’s give the spotlight to that great character actor Sig Ruman, making his way into a third film, after #345 White Christmas and #190 Nothing Sacred!

He also appeared in the very late Marx film A Night in Casablanca, which did not make the cut!

Coming tomorrow! If I wasn’t stoned, there is no way you would have talked me into this!