I would normally start by telling you all to SHUT UP, but seriously, I need some input. This movie was a famous disappointment at the box office in the summer of 1993, and critically didn’t fare much better. It’s the weird resume blip for Schwarzenegger between Terminator 2 and True Lies. But, like, I legitimately love this movie, and simply don’t understand the hatred it seems to bring out in people. Really, why don’t more people like Last Action Hero?

As I’ve stated many times, I like movies about movies, so that certainly gives it a typical bounce from me, okay, fair enough. But even beyond that – early ’90s Schwarzenegger – arguably the best variant form of Schwarzenegger ever available. John McTiernan, great action director, and yes, if you’ve read closely, you’ll notice that I prefer Last Action Hero to #223 Die Hard. I’m not ashamed, it’s true. Charles Dance, the future Tywin Lannister – great villain, funny villain. F. Murray Abraham for the second day in a row – equally solid baddy. Tons of movie in-jokes. Parade of guest stars, once the movie jumps into the real world. Is that it? People don’t care for all the real world bullshit? It’s too self-referential (and self-reverential)? I think this does damage certain movies – Ocean’s Twelve, seriously, what the fuck? – but this whole movie is about these action movie tropes and conventions and their impossible transitions into reality, and then backwards. What, this isn’t interesting? I thought it was a super clever movie, and pretty well executed too.

Okay, Austin O’Brien is maybe a bit much, but he’s not a bad kid actor. He was the poor man’s Macaulay Culkin of his time – literally jumping into My Girl 2 to fill the void – and he is the star of this movie, no way around it. So was it that? We needed to get into the Jack Slater film somehow, why not through a kid flying into the action? What’s wrong with that? And he gets some funny lines. Come on! Last Action Hero is way better than you remember!

Even if it gets a little awkward when it first transitions from the big screen to reality, that ending totally pays it off, no? All of a sudden, other movie characters are coming through the magic theater screen or whatever, havoc gets wreaked, young Danny Madigan needs to fix things with Slater’s help (or the other way around) – great ending! Seriously, what the hell is your problem? Why are you judging my adoration of Last Action Hero so hard right now? Where do you get off, buddy?!

But really, tell me what the story is, because I don’t get it. #204 Semi-Pro, okay, I understand that might just be me who likes it, but Last Action Hero deserves to be right up there with Arnold’s best work. Fight me, I don’t care what you say.

Awards?? Are you kidding me?! The Razzies put it up for Worst Picture, Actor, Director, Screenplay, Song (AC/DC’s “Big Gun” is perfectly fine!), and Worst New Star for O’Brien. The Stinkers also nominated it for Worst Picture and Actor. Hell, the Dallas/Fort Worth Film Critics Association named it the Worst Film of 1993. What kind of bullshit conspiracy against Jack Slater and his tough guy action fun was this? This, my third favorite film from ’93, deserves better, but no hokey awards I give out can make up for this public drubbing. We failed you as a people, Last Action Hero.

Big cast, plenty of repeaters, with F. Murray popping up in his third movie out of the last six covered (#193 They Might Be Giants, #197 Inside Llewyn Davis, and #279 Muppets from Space some time ago), as well as Rick Ducommun making the Four-Timers as well, after #325 Gremlins 2, Die Hard, and #198 Spaceballs. We’ve also got Leeza Gibbons making her third appearance as herself in a list film, following #259 Soapdish and #219 The Player, which I guess should’ve been expected, given all the movie business films from the early ’90s populated here. And also, an early cameo appearance by Ian McKellen as Death – it was only after decades of stage and BBC work that he’d break out in a worldwide way – hitching him to the Three-Timers, after his more famous work in #277 X-Men and #362 The Hobbit. 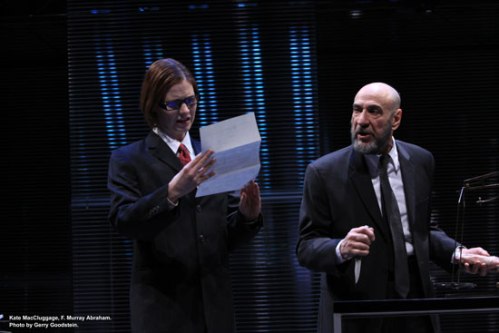 Fun fact: I saw F. Murray Abraham as Shylock in Merchant of Venice in Chicago some years back – fun!