Since its inception the Death Pool has been one of the world’s most popular sporting events.  Celebrity deaths are as much a staple of sporting life in history as the discus, the marathon, and the New Orleans Hornets. They have the ability to bring people together in sorrow, but also in thrilling elation when your team grabs the points for a recent corpse and contends for the DPE championship trophy, the Tin Mickey cup.  There are have been controversies (Team Baguette owner Charles Guiteau assassinating President Garfield in 1881 comes to mind), but by and large the DPE has been riveting, enthralling, wholesome entertainment.

Some of the most memorable moments in Pool history are reminisced over and argued about from generation to generation, at Christmas dinner, over a pint at the pub, in the bleachers at team stadiums around the globe, and everywhere in between.  Let’s look at some of those unforgettable moments and match ups now, shall we?

One of the most dramatic seasons on record, 1977 was highlighted by the tremendous showdown that evolved in week 33.  Team Querulous had a commanding season lead going into their head-to-head match up with what had long been considered a novelty outfit, Team Wham-O, notorious for drafting irrationally, aiming for huge payouts by drafting celebrities unlikely to die, and thus they normally finished near the bottom of their division.  But, on Tuesday the 16th of August,

The secret word was "Querulous"

Wham-O stunned the world with the death of the King, Elvis Presley, jumping them out to a strong lead, the first the team had this late in a season in over thirty years.  Not to be outdone, though, Querulous

bounced back on Friday, snaring points for comedy legend Groucho Marx, throwing the clubs into a dead heat.  Wham-O would score the week victory, their first ever against this opponent, but Querulous ultimately claimed the Cup with the deaths of Zero Mostel in September, and Charlie Chaplin icing the cake Christmas Day. 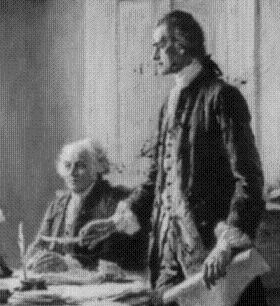 Like many early years of the DPE, 1826 was pretty light on scoring.  This is largely due to the fact that there weren’t many worldwide celebrities to choose from (the draft only went seven rounds back then), and so considerably fewer died than do today.  Going into the summer, Team Corpuscle was out in front, having claimed the one significant corpse in recent months – the German composer Carl Maria von Weber.  But then, on the fourth of July, archaic outfit Team Excessum exploded into first with the demise of the second President of the United States John Adams, as well as the third President Thomas Jefferson.  This ultimately would bring Excessum the Tin Mickey, after which the club changed its name to Team Foufa (for “Founding Fathers”).

After the strike shortened season of 1994, when all the dying picked up their IVs and walked off the job, there was debate whether the DPE could ever fully regain the public’s trust.  Like boxing and horse racing, the Death Pool was seen as a sport on the decline.  In 1997, with attendance sharply down, and the league operating heavily in the red for the third straight season, the number of teams contracted from 45 to 33, and many inside the

A couple of honeys in the morgue

sport worried that the death knell may have tolled.  It would take a major event, or a major showdown, to revive some life in the Death Pool.  As the summer of ’97 wound down, attendance reached an all-time low.  For the first time since World War II the All-Star celebration hadn’t sold out, and the pennant race was remarkably uninteresting, with Team Rigor Mortis up by a bundle, having recently extended their lead with Robert Mitchum’s death July 1st.  But in the final hours of August came the grisly death that would reverse DPE fortunes, and indeed return the entire sport to prominence.  Team Precipice’s third round pick of Diana, Princess of Wales had seemed like a waste in the New Year’s draft, but her demise in that Paris tunnel turned the club from a middling also-ran to a powerhouse.  The worldwide grief was only eclipsed by the global Death Pool interest her death invoked, and suddenly the fans were back.  Precipice followed Diana with a strong second act – Mother Teresa in the grave six days later – and so the great Rigor Mortis/Precipice rivalry was born.

It isn’t every season the DPE championship is decided in the final month, never mind the final week.  More times than not over the years the Thanksgiving front runner goes on to victory, due mainly to the number of teams and the comparatively small number of celebrity deaths.  But, 1916 was no ordinary year, I don’t need to tell you.  Going into the final days, scheduling had lucked out on a masterpiece of a head-to-head contest.  Team Chickory held a slight lead for the overall title on their final opponent, Blitzkrieg United.  Both had scored with authors (Henry James and Sholom Aleichem, respectively), and were the only legitimate contenders for the DPE Tin Mickey cup.  On the 28th, Chickory appeared to sew up the win on word that Edward Strauss, a lesser Strauss in the Strauss musical dynasty, had passed on.  Their somewhat obscure pick up now looked like a genius move.  Yes, the cup was practically filled with the traditional victory mutton leg, or so it seemed, but lo! The Blitzkrieg was not out of surprises!  The next day , with time on the calendar quickly running out, the news blared across loudspeakers at stadiums everywhere.  One of Blitzkrieg’s late round selections, whose name was only mildly known around the world at this point, had died, and died, and died.  His name?  Grigori Rasputin, the Mad Monk himself!  The result?  A stunning victory for Blitzkrieg United, and a thrilling ending to an incredible season!

This has been Great Moments in Death Pool History, sponsored by Camel cigarettes, the Ford motor company, and thanks to contributions from viewers like you!